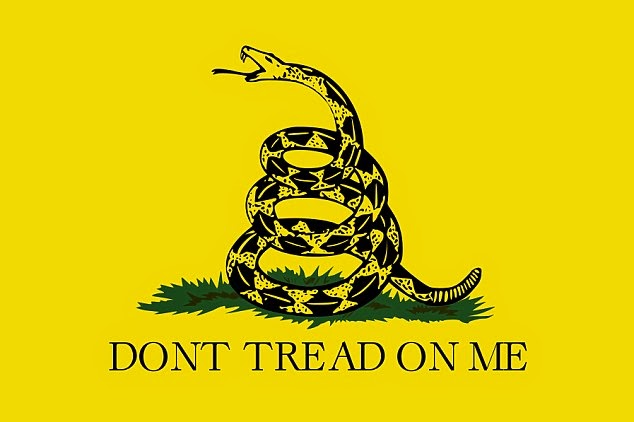 A married white supremacist couple gunned down two Las Vegas police officers, draped one of their bodies in a revolutionary flag and gunned down a civilian before killing themselves, it has been revealed. The husband and wife, identified by neighbors as in their late 20s and named Jared and Amanda, stormed a Cici's Pizza on the northeastern edge of the gambling mecca just before 11.30 a.m. Sunday morning and killed the cops while they ate lunch. They then ransacked the dying cops bodies for ammunition and weapons before covering them with the infamous 'Don't Tread On Me' flag from the American Revolutionary war. The two officers killed have been identified as 13-year department veteran Alyn Beck, 41, and 31-year-old Igor Soldo, Sheriff Doug Gillespie, who had been on the force since 2006, authorities said. Neighbors said the couple openly obsessed over conspiracy theories and wanting to murder police officers in the weeks before Sunday's attack. 'My officers were simply having lunch,' Sheriff Doug Gillespie solemnly said during an afternoon news conference. Both police officers were shot in the head at point blank range by the suspects while eating pizza on their lunch break, a witness told KLAS. They were not even on duty. The duo then reportedly shouted at the horrified diners to 'tell the police the revolution has begun,' as they fled the restaurant for a nearby Walmart and callously bragged to a bystander in the parking lot they had just killed two police officers. One of the two assailants then shot a female civilian dead just inside the doorway to the store, according to reports. A Las Vegas Metro Police Department spokesperson reached by MailOnline was not able to confirm if the dead civilian is male or female. A shootout with SWAT officers then ensued before the female suspect shot her male partner and then killed herself, according to police. The male gunman shot himself dead to bring the siege to an end. Daily Mail Read More>>>>>

December 30, 2019
Church of Christ shooter who killed two named as Keith Thomas Kinnunen, 43  A gunman who opened fire at a packed church and killed two has been named as Keith Thomas Kinnunen. Kinnunen, 43, was himself shot dead by a retired FBI agent turned security guard at the West Freeway Church of Christ in White Settlement, Texas Sunday morning. Kinnunen has previous arrests for aggravated assault with a deadly weapon as well as theft of property, NBCDFW reported. The church’s service is live-streamed online every Sunday, with horrific video footage capturing the moment Kinnunen opened fire and killed two, before he himself was neutralized. Parishioners could be seen screaming with fear and hiding under pews in the moments after the shooting.His victims have since been named as church deacon Anton Wallace and Richard White. Kinnunen was also arrested on illegal weapons charges in New Jersey in 2016, when he described himself as ‘homeless,’ and claimed to be visiting the state to take photos of …
Post a Comment
Read more

July 23, 2019
Two murderous Sodomites on the run Two teenagers initially thought missing in Canada are now named as DANGEROUS SUSPECTS in the gruesome murders of an Australian backpacker and his American girlfriend  Two teenagers who were previously described as missing have been named as suspects in the murders of an American woman and her Australian boyfriend in Canada. Police named Canadian teens Kam McLeod, 19, and Bryer Schmegelsky, 18, as suspects in the murders of Lucas Fowler, 24, and Chynna Deese, 23, on Tuesday. The two teenagers were described as missing on Monday but police named them as suspects after they were found, alive, in northern British Columbia. Now, they are believed to be in Saskatchewan - 1156 miles from where the young couple's bodies were found - and are thought to be dangerous. The pair, who are elementary school friends, left Vancouver Island for Whitehorse ins search of work sometime before the murders.   They stopped communicating with their families severa…
9 comments
Read more

December 30, 2019
Horrifying moment 'terrorist' bursts into Hanukkah party with a machete to stab five as carnage is revealed and cops link him to second synagogue stabbing - but his pastor says he's mentally ill  Horrifying images have emerged of the moment an attacker armed with a machete burst into a Hanukkah party in upstate New York on Saturday and the carnage he left behind inside the rabbi's home. Grafton E Thomas, 37, of Greenwood Lake, pleaded not guilty after he was arraigned on five counts of attempted murder and one count of burglary in Ramapo Town Court late Sunday morning. His bail was set at $5million. He is accused of stabbing five people in Monsey, New York. Chilling images from inside the property show bloodied floors and overturned chairs following the assault which has been labeled 'an act of terrorism' by Governor Andrew Cuomo. One surveillance photo shows the suspect wearing a hood and scarf making his way up stairs to Rabbi Chaim Rottenberg's …
Post a Comment
Read more