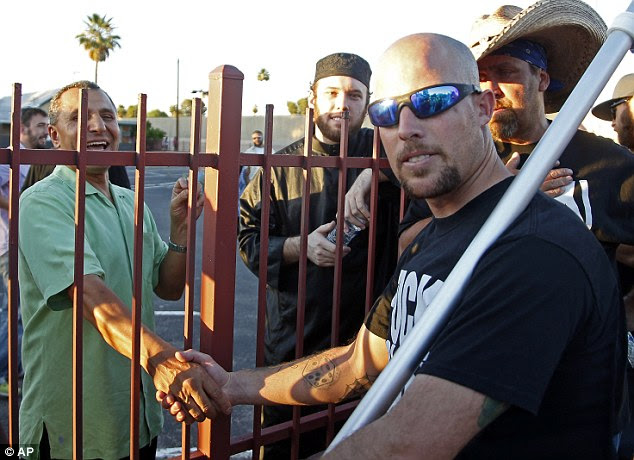 Why Can't We be Friends?

I thought for sure the that the talented tattooed Ant-Muslim protester Jon Ritzheimer turned tail and folded like most evangelical protestants do when confronted with Islam. Ritzheimer made a big show in the summer with his draw Muhammad campaign but in the end Ritzheimer  shook hands with his Muslim enemies and recanted his views of Islam. Again, Protestants are not effective in fighting Islam.

Can you name any Protestant Crusaders against Islam? LOL!! There isn't any! Making war on Islam to wipe it completely off the face of the earth is a Roman Catholic work! Protestant scum need not apply.

Guns alone will not defeat Islam (remember Muslims have guns too!) What the Muslim does not possess is the Crucifix of Jesus Christ Crucified because Muslim do not possess the true faith. Islam like Protestantism is at war with Jesus Christ Crucified and the religion & Church He founded - which is the Roman Catholic Faith. If you're not Roman Catholic you are not an effective agent against Islam. Protestants and Islam are cut from the same cloth.

No man can crush the heresy of Islam without the Crucifix of Jesus Christ Crucified and the help of the Mother of God. Got it?

Good luck stroking your loaded guns on the way to visit Mosques.

Instead Ritzheimer is making videos of him handling his gun and using the f word to prepare his battle against the Muslims:

A high-profile anti-Islam activist has posted a threatening video online in which he vowed to go to New York to confront Muslims - sparking the FBI to send a warning to the NYPD. Jon Ritzheimer, a Phoenix based anti-Islam activist posted the expletive-ridden video on Facebook on November 18, slamming President Obama, refugees and Muslims. In the video, Ritzheimer held a gun and also laid into The Islamic Post, a publication of the Hancock, New York-based organization the Muslims of America. In June, it published an article that labeled Ritzheimer an 'American Taliban.' In response, Ritzheimer fires back: 'What's up America? Jon Ritz here with my brother Tyler, one of my old high school brother's here, and we're driving all the way across America all the way to New York to go see those ar******* at The Islamic Post who decided to publish a paper calling me a f****** terrorist in this country.' He continued: 'F**k you Muslims. F*** all of you. We're gonna stop at virtually every mosque on the way, flip them off and tell them to get f******.' Daily Mail Read More>>>>>>

Yeah Ritzheimer  your use of  the word FUCK is gonna show those Muslims a thing or two!

So why is the Muslim compromiser Jon Ritzheimer starting a new Anti-Muslim campaign? Why is the once Anti-Muslim turned Pro-Muslim now at war with Islam again?

Maybe just maybe...Mr. Why Can't We Be Friends is funded by Obama!


What a better way for Protestant Government thugs to celebrate Christmas and bring in the new year then to have a gun battle in New York City with a bunch of Muslims.....Mr. Honey Dick can sit back from a safe distance and watch his new recruits engage in the great NYC Mosque gun battle  of 2015!

And some poor moron will say....