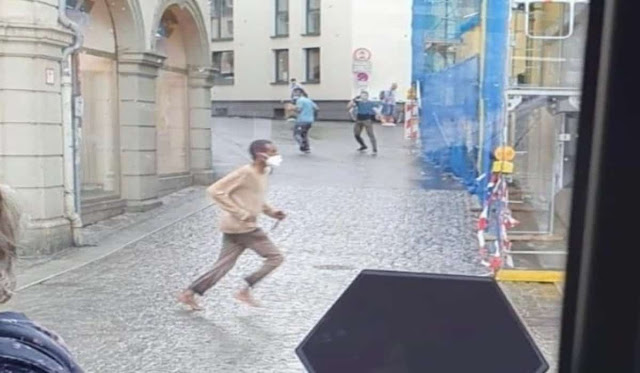 I'm Gonna Stab Me Some Whites Today
But I'll Wear My Mask So I Don't Get Covid.....
Wurzburg horror attack: At least 3 dead after violent assault –police seal off German city
SEVERAL people have been wounded following reports of a knife attack in the German city of Wurzburg.Germany police say a “major operation” is being conducted in the city located north of Bavaria. Local media have reported multiple people have been stabbed. At least three people have been killed and six others injured, German newspaper Bild reports. German police said a suspect has been arrested. The force reassured the public there is no wider threat to safety. The incident took place at around 5pm in the downtown region of Barbarossaplatz. There are unconfirmed reports the suspect was shot in the leg before being detained. Lower Franconia police tweeted: “We have arrested a suspect. "There are no indications of a second suspect. “There is NO danger to the population." Wurzburg has a population of around 130,000 and is located south east of Frankfurt. Source

BREAKING VIDEO: 2 people dead and multiple injured in stabbing attack at Barbarossaplatz in Wuerzburg, Germany. A man with a knife can be seen attacking people in the video: