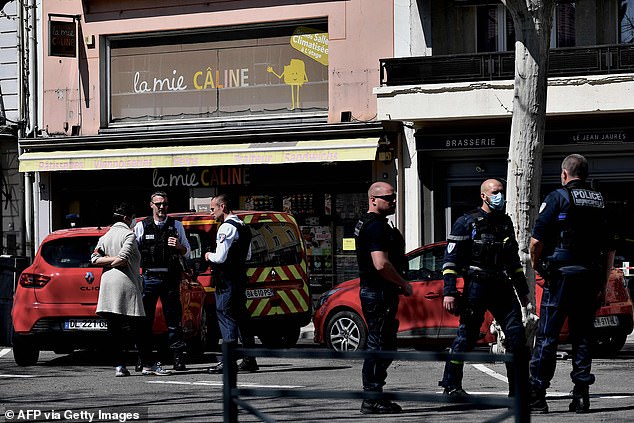 A crazed knifeman stabbed two people to death and injured seven others in France. The assailant is said to have shouted 'Allahu Akbar' before knifing 'at least nine people' who were doing their shopping in Romans-sur-Isère, southern France, local media reports. One of the wounded is in critical condition in hospital. The attack around 11am this morning comes on France's third week of lockdown due to the coronavirus, which has killed more than 6,500 people in the country alone. The alleged attacker - who said he was from Sudan - stabbed a Romanian resident who had just left his home for his daily walk, local media reports. He slit the man's throat in front of his girlfriend and son. Following that the assailant entered a tobacco shop, stabbed the tobacconist and two customers, and then went into the local butcher's shop, the reports add. He grabbed another knife from there and attacked a client with the blunt end before entering a supermarket. Some shoppers took refuge in a nearby bakery. Prosecutors did not identify the suspected attacker who has been living in France since 2017 and has has refugee status according to Le Point. Source