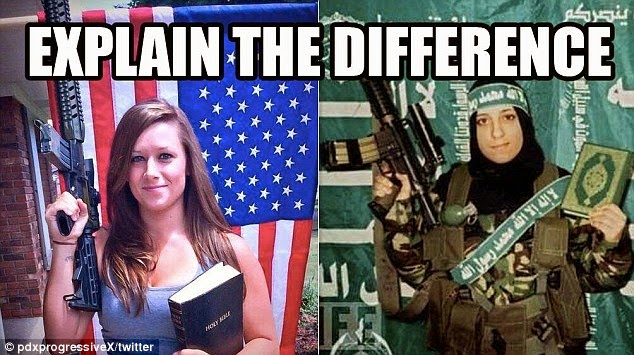 Gun nuts at it again, this time Holly Fisher shows her love for the bible and love for her gun.

This blog has pointed out the similarities between Muslims and Distributists. Both camps hate authority, capitalism, the new world order and universalism of all kinds - political and economic - and both groups love their guns and religious reading material.

Both camps will eventually see eye to eye on several issues forming an open political coalition of sorts.

Here is the story of a bible thumping gun nut as told by the Daily Mail:

A conservative Christian and mother of three from West Virginia has provoked vitriol from the left and support from the right after sharing her extreme beliefs about guns, abortion, health care and other political hot issues. Holly Fisher, who Tweets using the provocative handle Holly Hobby Lobby, has created uproar online in the wake of last week’s controversial birth control decision by the Supreme Court. To celebrate the court’s decision, Fisher posted a provocative photo online of her wearing a pro-life T-shirt, while posing in front of a Hobby Lobby store and holding a Chick-fil-A drinking cup. ‘Attention Liberals: do not look at this picture. Your head will most likely explode,’ read the caption on the photo posted on July 1. The image went viral, prompting opponents of the Supreme Court’s decision in the Hobby Lobby case to post offensive responses and even make threats against Fisher. Daily Mail Read More>>>>

You will never  see Holly Fisher or any Distributist put down their guns and pick up a crucifix - a gun in one hand and a protestant bible in the other tells you all you need to know.