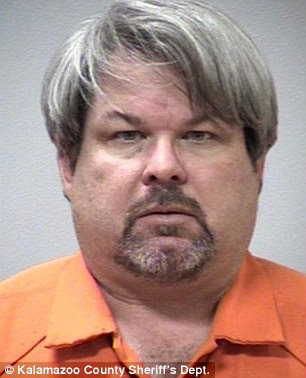 Pictured: Three victims of the married Uber driver, 45, who 'killed six people during random shooting spree from his cab while he picked up fares in Michigan'


A married 45-year-old Uber driver is in custody after he allegedly shot six people dead at random during a murder spree in Kalamazoo, Michigan. Father-of-two Jason Dalton surrendered to police on Sunday morning after he allegedly fired a barrage of 30 bullets at eight innocent and defenseless people during a five-hour rampage in his Chevrolet Equinox taxi He was arrested in a car he had been using to drop off and pick up passengers in between the attacks at three different locations - a restaurant parking lot, a car dealership and an apartment complex. Some who got in his car to use his service said he was driving erratically and one even called 911 to report his bizarre behavior when they got out. Dalton was apprehended and taken into custody without a struggle and police found a semi-automatic handgun inside, according to reports. Michigan State police identified four casualties who were shot in the parking lot of a Cracker Barrel Mary Lou Nye, 63, Mary Jo Nye, 60, Dorothy Brown, 74, and Barbara Hawthorne, 68.  Daily Mail Read More>>>>>>