Originally Posted 11th July 2011 by dxv 515
Wanna Successfully Rob A Bank? Wear A Burka! Society Is Too Politically Correct To Catch On.
Who would stop a Muslim woman wearing a Burqa on the street? No one. Not the cops, not the TSA, not the FBI, no American would never interfere with another's right to wear religious garb. So take advantage of America's political correctness and rob a bank while wearing a Burka. Get your pals to join in, make it a group effort. Should be done in a very large city, simply because that is where the most highly intelligent and astute Americans reside and they would never think twice about a group of Burka wearing Muslim bitches walking down the city streets towards the bank. The small town folk however still have enough common sense to question a gaggle of Burka wearing Muslim bitches walking down the main street towards the town bank. So it is best to target the big city banks. Read More>>>>>>>> 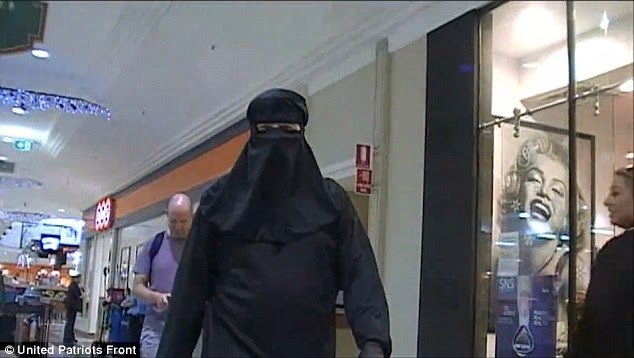 Far-right group member 'tests bank security protocols' by filming reactions of customers and staff when he wears a helmet, a furry dog suit and a BURQA into branches
A member of a far-right anti-Islam group has filmed himself walking into a bank wearing a motorbike helmet, furry dog suit, and a burqa as part of what he claims is a social experiment to 'test bank security protocols.' In the footage, Perth man Dennis Huts sets about disproving what he believes is a 'politically correct allowance'. He thinks burqas should not be worn inside Australian banks for the safety of customers. The video was uploaded to the United Patriots Front Facebook page with the caption: 'This shows how our society cowers before Islam in fear of offending it.' 'This is the clear and present danger and people need to wake up.' Daily Mail Read More>>>>>