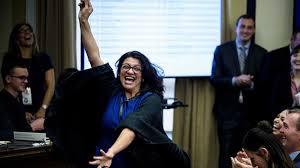 'We're going to impeach the motherf***er': Democrat Rashida Tlaib threatens Trump's presidency in foul-mouthed tirade hours after being sworn in as the first Palestinian-American congresswoman

Newly-elected Democrat Rashida Tlaib told supporters she is going to impeach President Trump just hours after being sworn in. Tlaib, who was elected to Michigan's 13th district as the first Palestinian-American woman in Congress, made the remarks at a swearing-in party on Thursday. Speaking in a dimly-lit room, Tlaib told a cheering crowd: 'We're going to impeach the motherf***er.' She made the foul-mouthed remark while recalling a conversation she had with her son after getting elected. 'People love you, and you win,' she told the crowds. 'And when your son looks at you and says: "Mumma look, you won, bullies don't win." Source