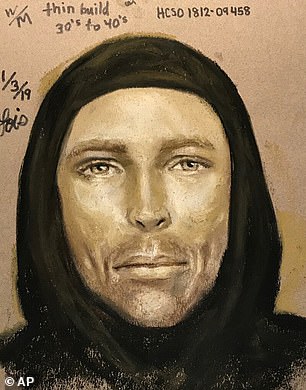 Cops release sketch of white suspect they believe murdered seven-year-old Jazmine Barnes in a Texas Walmart parking lot, as her family claims her killing was a hate crime and the reward for information rises to $100k

Police have released a sketch of the man they believe killed a seven-year-old Houston girl who was shot dead in her family's car this week. Jazmine Barnes was in the back seat of her family's car with her three siblings and mother when the driver of a red pickup truck pulled alongside the vehicle and fired inside, killing her on Sunday December 30. The Harris County Sheriff's Office has released the sketch of the suspect based on descriptions by Jazmine's family. The suspect is a white man with pale skin, blue eyes, a thin build and a mustache and is believed to be in his 30s or 40s. He was wearing a black hoodie at the time of the shooting. Source