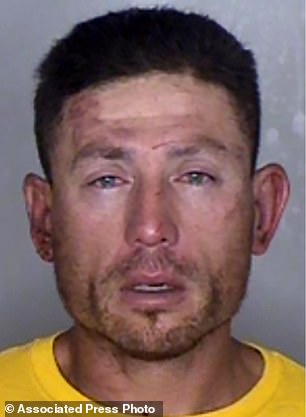 California tree-trimmer, 37, is charged with murdering two customers and an acquaintance by slashing their throats - and was arrested 'while trying to kill a fourth person with a hatchet'
A tree trimmer in rural Northern California has been charged with slashing the throats of three of his elderly customers, before he was caught trying to kill a fourth person with a hatchet. Ryan Blinston, 37, of Oroville, was working for a tree-trimming service in Butte and Tehama counties, north of Sacramento, last May and June, when he allegedly returned to the homes of several customers and murdered them. Loreen Severs, 88, of Los Molinos, died and her husband, Homer Severs, 91, survived being stabbed on May 23 but died that December of an unrelated illness, authorities said. Blinston also is accused of killing customer Sandra George, 82, of Oroville. Police say he also murdered an acquaintance, Vicky Cline, 57, also of Oroville, by slashing her throat. He also is charged with setting Cline's car in an apparent attempt to cover his tracks. Source
at May 13, 2021