If U Blood Throw It Up.......Garland Tyree, 38, Bloods Leader On The East Coast Shot & Killed By The Police


Gang leader dead after shooting firefighter, setting house ablaze
The East Coast head of the Bloods gang — who wounded a firefighter after torching his Staten Island house Friday morning during a confrontation with US marshals — is dead after a gunfight with cops, law enforcement sources said. The gunman, 38-year-old Garland Tyree, had come out of his home shooting again at officers around 11:45 a.m., and authorities responded with gunfire and tear gas. Tyree, who went by the nickname “Murder,” was fatally shot by an Emergency Services Unit cop in the exchange, the sources added. His distraught family was at the scene. The shootout came several hours after Tyree declared “Today I die” on Facebook before torching his Staten Island house when marshals came to serve a federal warrant on him. An FDNY lieutenant was shot in the leg and buttocks as he responded to the blaze. NY Post Read More>>>>>> 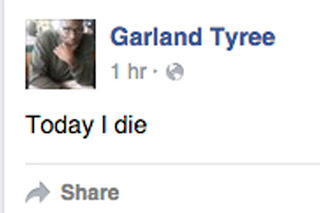