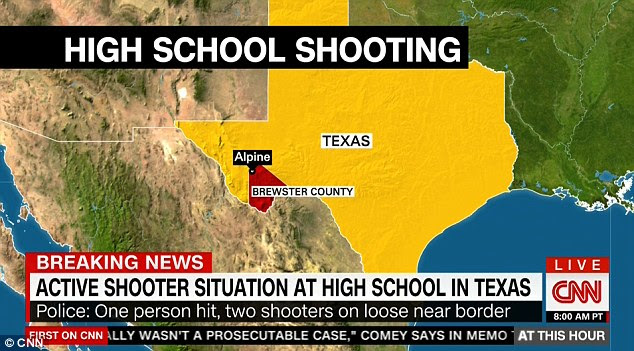 Just north of the Mexican border:

Girl shoots another girl then commits suicide at Alpine HS

Two DHS agents shoot each other...


A girl at Alpine High School in Texas shot and wounded another girl before fatally turning the gun on herself Thursday morning, police said. The shooting happened in a bathroom before 8 a.m., law enforcement officials told ABC7 New York. Brewster County Sheriff Ronny Dodson said the shooter died from a self-inflicted gunshot wound. The other girl was wounded, he said. A police officer was also accidentally shot and wounded by a marshal at the school, Dodson said. The shooting happened less than three weeks after classes began Aug. 22. The district — comprising only one elementary, middle and high school, with about 1,000 students — went into lockdown after the gunfire. NY Daily News >>>>>>