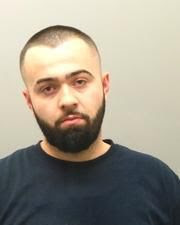 Muslim made threats to his co-workers the day after thanksgiving:


A south St. Louis County man has been charged with making a terrorist threat after allegedly telling co-workers at a luxury car-detailing shop that he belonged to ISIS and could have their job site blown up by making one phone call. Prosecutors on Sunday charged Mustafa Barimac, 26, with the felony. His bail was set at $500,000, cash only. He made his initial court appearance Monday morning. His next court date is scheduled for Jan. 4 before Associate Circuit Judge John Borbonus. Creve Coeur police say Barimac made the comments on Nov. 25, the day after Thanksgiving, to co-workers at an auto detailing firm, Teph Seal, at 11830 Olive Boulevard. Source

2) Criticism against #Iran -backed Hezbollah following the #Beirut explosion "The primary suspect is Hezbollah, more than ...