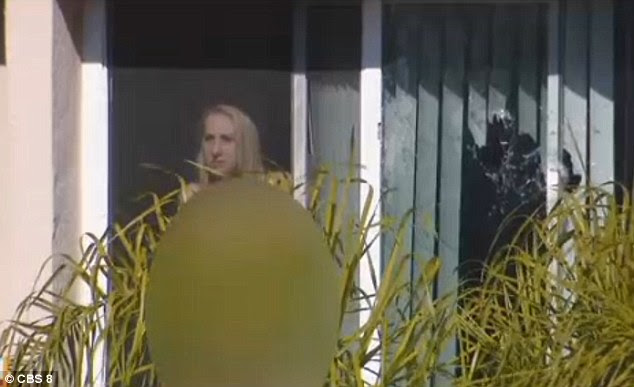 A woman who fired a gun at her neighbors has been arrested by police after a nine hour standoff that included the SWAT team being called to her San Diego apartment and her standing topless in front of her shattered window on Thursday. Police were first called to 35-year-old Brittany Lefler's apartment on Beadnell Way around midnight after numerous neighbors complained about the noise coming from her home, CBS 8 reported. Officers left her home once she quieted down, but around 5am, she was reportedly spotted walking around with a handgun as she allegedly threatened the neighbors who she believed called the police on her.

'She ran back into her apartment and our suspect fired at least one round through the door in the apartment,' Lt. Scott Wahl of the San Diego Police Department told CBS 8.  'It went through a couple walls and we think it lodged in a bathroom inside that apartment.'  He added that three people were inside the apartment, including a child, but no one was hurt.  When police officers arrived back to the scene, Lefler did not come out of her home and refused to do so.  Daily Mail>>>>>>>