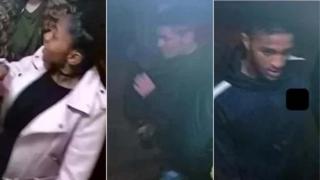 Witnesses said up to 20 people watched as the 17-year-old boy was kicked and punched in the assault in Shrublands Avenue, Croydon, on Friday. The Kurdish-Iranian victim reportedly suffered a fractured skull and blood clot. Eight people are being questioned on suspicion of attempted murder. The Met wants to speak to the three people pictured in connection with the investigation.Three people - two men aged 23 and 26 and a 17-year-old girl - were arrested on Sunday while four men and one woman, all aged 20 or 24 - were held on Saturday. All remain in custody. One resident of Shrublands Avenue said: "There was a massive group coming up from The Goat pub. "You couldn't see who was hitting who. There was one person, the one who ended up in hospital, he was getting absolutely beaten up. "There was a group of roughly 10 people kicking and punching him and the rest, another 10 or 20, were all just around watching." They added witnesses "couldn't do anything against a group of 30 people" and waited until they had moved on to help him. BBC>>>>>>>