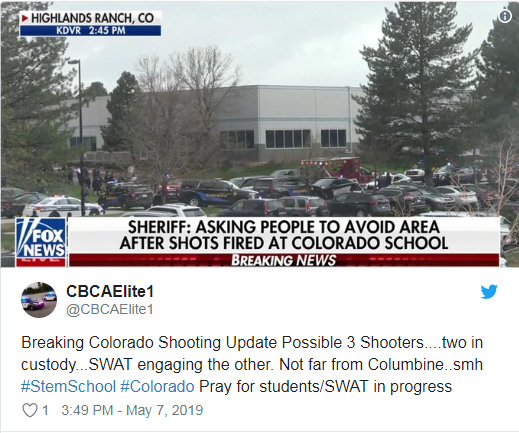 Was this a Ramadan attack?

One suspect in custody

Two suspects on the loose?

HIGHLANDS RANCH, Colo. — Shots have been fired at a STEM School in Douglas County. Two people are believed to be injured, according to the Douglas County Sheriff’s Office. The sheriff’s office is calling this an “unstable situation” at the school at Ridgeline and Plaza in Highlands Ranch. People are asked to avoid the area. The STEM School is on lockdown and all other Highlands Ranch Schools are on lockout, according to the sheriff’s office. Parents can pick up children at Northridge Elementary at 555 Southpark Road, the Sheriff said. South Metro Fire Rescue confirmed that they have numerous units on the scene to help and encourage drivers to leave streets open for emergency vehicles. Cherry Creek Schools are also on “secure perimeter” due to the situation at the school in Douglas County. Source

“Two individuals walked inside the STEM school. Got deep inside the school” and engaged students in “two separate locations. There were a number of students who were shot and injured,” the sheriff said. He said authorities have all of the suspects involved in custody.

The school “almost immediately” notified the dispatch center. “About two minutes later, the first deputies arrived and engaged the suspects.” Spurlock said he would not release the suspects’ names but said authorities didn’t have the suspects “on any radar that we know of.” He believes one suspect was an adult and one was a juvenile, but authorities are verifying their names. He confirmed that eight students were in hospitals, and several were in critical condition. One student had not yet been unified with family members, so victims’ names were also not being released.

The active shooter reports emanated from the STEM School Highlands Ranch at 8773 S. Ridgeline Blvd. Initially, rescue teams were going through the school.A parent told Denver7 that his son told him a shooter walked into a classroom with a gun. He said a shooter removed a gun from a guitar case (authorities have not confirmed that detail.) He said his son, a 17-year-old junior in high school, was shot three times but will survive. Source