A MESSAGE FROM THE CEO


The Counterpart family faced an attack on our cherished team members in Kabul, Afghanistan yesterday. We mourn the loss of the security guards from the Afghan police special forces who protected us. We will never forget their sacrifices. They will be forever etched in our memories and forever part of the Counterpart family.

We also witnessed the horrific violence inflicted on our team members during Ramadan, the most holy time in the Muslim calendar. We know this attack had nothing to do with Islam. It is instead borne of hatred and ignorance and darkness. Counterpart has always stood for inclusion and learning and light. We categorically reject this senseless violence.

We will not be cowed by cowardice. Our Counterpart team stands stronger today than ever before, bolstered by the unwavering support of our team members and our wider community who offered every assist. We can never repay that debt. Instead we will move forward in gratitude: stronger and more resilient than ever before.

My best wishes and thanks to our colleagues, partners, and friends in Afghanistan and around the world, 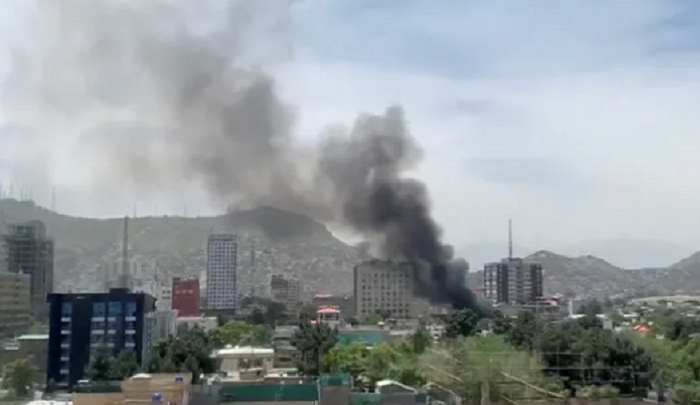 The Taliban have killed at least five people in a suicide attack on the offices of a US aid group in the heart of the Afghan capital, claiming it targeted Counterpart International because it promoted women “mixing” with men.

Coming as US negotiators try to reach a peace deal with the Taliban, the attack in Kabul is likely to fuel the concerns of critics who say the militant group cannot be trusted to protect women’s rights and other freedoms, whatever they may pledge at the negotiating table.

It began with a suicide blast at the entrance to Counterpart International’s Afghanistan headquarters in the centre of Kabul, near the offices of the attorney general.

Five gunmen then raced inside the compound and battled special forces soldiers for more than six hours. About 200 people were evacuated from two buildings as the fighting raged.

Four of the dead were civilians and one was a policeman; 24 others were injured. Counterpart, which is based in the US and has operated in Afghanistan since 2005, said it was incredibly saddened by the attack and was “working as quickly as possible to account for our staff. Their safety and security is our primary concern.” Source