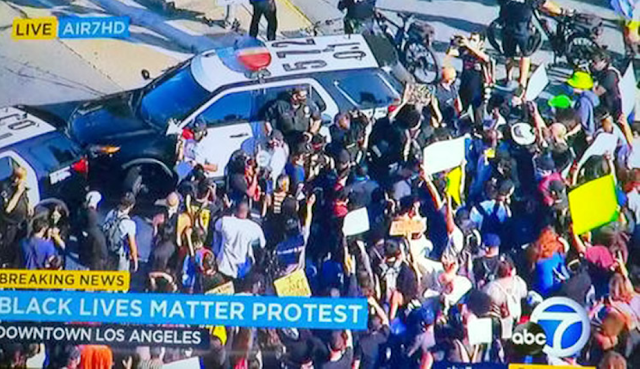 That's what? 14 days for the LA RIOTS 2020...
How many days until the Riots hit Chicago....
Black Lives Matter protester is left unconscious after falling from hood of police cruiser that was attacked as Los Angeles highway was closed down by demonstration in support of George Floyd
A protester was thrown from the hood of a police cruiser in downtown Los Angeles on Wednesday night as a Black Lives Matter demonstration calling for justice for George Floyd turned violent. About 1,000 protesters descended on LA following the 46-year-old father-of-two died in Minneapolis Monday, moments after a white cop knelt on his neck for eight minutes until he passed out. As protests entered their second day in Minnesota, tensions began building between law enforcement and African-American communities across America, with demonstrators calling for the four officers involved in Floyd's death to be charged with murder. The first break-off protest sprung up in downtown LA Wednesday afternoon and quickly escalated into violence. Source