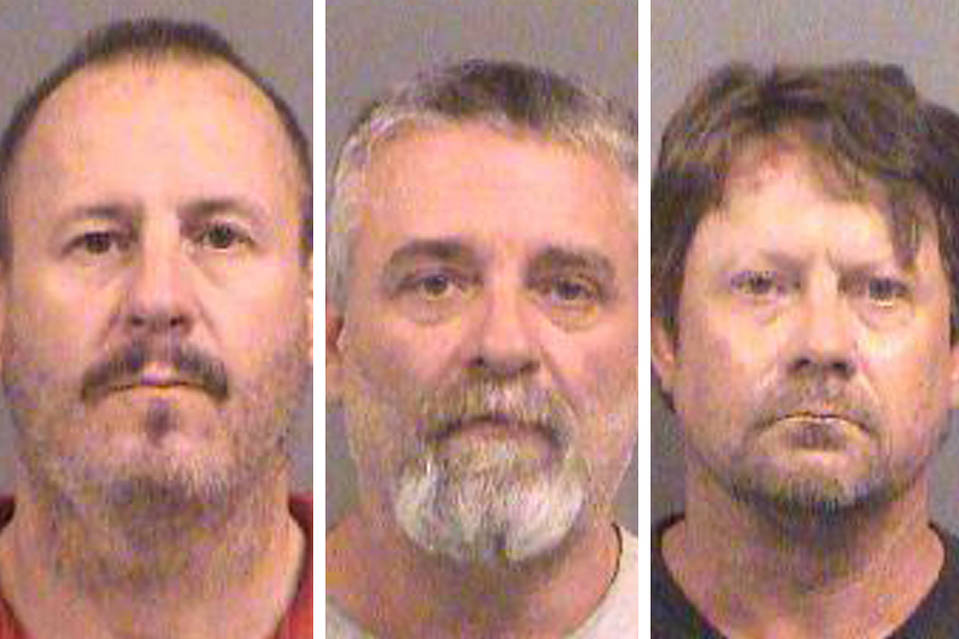 Three members of a militia group have been arrested for plotting to blow up a mosque and apartment where many lived the day after the election. Curtis Wayne Allen, 49; Patrick Eugene Stein, 47; and Gavin Wayne Wright, 49, were arrested on Friday and charged with conspiring to use a weapon of mass destruction. The three men are part of an extremist militia group known as the 'Crusaders', which is staunchly anti-immigrant, anti-Muslim, and anti-government. Acting U.S Attorney Tom Beall said the men were arrested at the end of an eight-month FBI investigation that saw agents go, 'deep into a hidden culture of hatred and violence'.  Daily Mail Read More>>>>>>

This is what you get when you are influenced by the writings of GK Chesterton and flirt with Distributism.

Question is....are these three Crusaders a creation of the Gary Michael Voris cabal?

Or are these three Crusaders fans of Ann Barnhardt!

Or some other Latin Mass outlet? Maybe Sevevacantist!

I'm pretty sure these three vote!

I'm pretty sure these three refuse to sit around waiting for the Holy Roman Emperor to be elected.

Because these men went out on their own!

That is a trait of the Latin Mass Traditionalist  - to go out on your own! No need for catholic lay leader.

Now that they are arrested and will soon be incarcerated for many years, I doubt very much that these three crusaders will be able to join the army of the forerunner to the Antichrist (another fine fellow who goes out on his own) to take on the Fatima Pope.

Are they Catholic? Probably. Apostates or practicing? Who knows yet. It is hard to believe that these guys attend the new mass and call themselves  Crusaders!

Mr. Stein was arrested for domestic terrorism - he wanted to blow up a mosque & apartment complex that was occupied by Somali Muslims

“The only fucking way this country’s ever going to get turned around is it will be a bloodbath and it will be a nasty, messy motherfucker. Unless a lot more people in this country wake up and smell the fucking coffee and decide they want this country back … we might be too late, if they do wake up … I think we can get it done. But it ain’t going to be nothing nice about it.” Patrick Stein

"When we go on operations, there’s no leaving anyone behind, even if it’s a one-year-old, I’m serious." Patrick Stein

“The only good Muslim is a dead Muslim” and that he would “enjoy” shooting Muslims’ heads. Patrick Stein

“When we go on operations, there’s no leaving anyone behind, even if it’s a one-year-old, I’m serious. I guarantee, if I go on a mission, those little fuckers are going bye-bye,” Patrick Stein