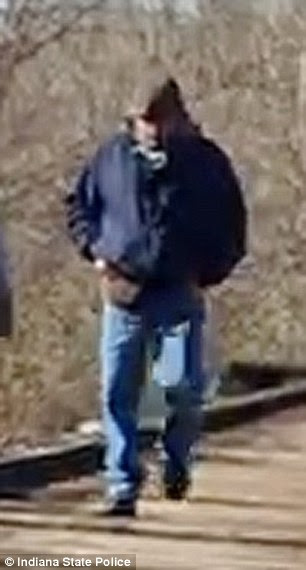 Hunting season is over. The above is just a hiker. But he has not come forward.

The above suspect looks Caucasian, or the suspect could be from Syria.

What do Muslim criminals have to lose, once in this country, the Media has their back. Muslim criminals are free to commit atrocities without fear of being caught. If the above is the Murder suspect, then he is long gone. probably saying his Friday prayers in some Mosque.

The police have received 100 tips on the suspect, but so far the police are not able to identify the man, which may mean that the suspect is not from the area and the crime was a crime of opportunity.

Again this is a crime of opportunity. The suspect has most likely done this before.

Maybe a ISIS Muslim keeping his killing skills in tact. 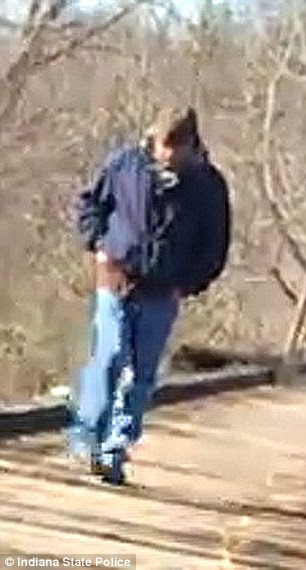 The authorities finally admit that the man in the photo is the suspect in the murder of Liberty German And Abigail Williams:


Since Wednesday February 15th, law enforcement officers have distributed a photo of a person observed on the Delphi Historic Trail. The photo appears to depict a white male wearing blue jeans, a blue coat/jacket, and a hoodie. During the course of the investigation, preliminary evidence has led investigators to believe the person, in the distributed photo, is suspected of having participated in the murders of Abigail Williams and Liberty German. Source

The Media says that the suspect is white - meaning a red blooded American.

Actually the man has a big bulbous nose and could possibly be a Mexican or most likely a Muslim from Syria.

I contend that the man took an opportunity to kill.

This is what Muslim men do - rape and murder. And when Muslims are invited into this country, they bring their bad habits of raping murdering and destruction with them. Its not like they check their perverted and evil passions at the door.

Captured ISIS jihadi reveals how he killed 500 civilians and raped 200 women during the terror group’s barbaric raids on Yazidi settlements... and boasts: 'It was normal'

Muslim from Iraq admits to killing over 500 and raping over 200. Do you think that if this man escaped and found himself in America that he would stop his raping and killing cold turkey - that he would just shut off his murdering ways?

"Indiana has a long tradition of opening our arms and homes to refugees from around the world but, as governor, my first responsibility is to ensure the safety and security of all Hoosiers," Mike Pence 2015