Oregon made history Tuesday in the movement to reconsider the nation’s war on drugs by becoming the first state to decriminalize small amounts of heroin and other street drugs. Voters overwhelmingly supported Measure 110, a coup for the New York-based Drug Policy Alliance, the same criminal justice reform group that backed Oregon’s successful marijuana legalization effort in 2014. Partial returns as of 11 p.m. Tuesday showed the measure winning 59% to 41%. Peter Zuckerman, campaign manager for Measure 110, called the win “a big step forward.” “Today is a huge day of celebration but the work is not over and we have a lot more work to do to win a better system for everybody,” he said. Supporters believe U.S. drug policy has filled the country’s jails with nonviolent offenders who need treatment instead of incarceration and has disproportionately affected generations of Black people. The Drug Policy Alliance poured more than $4 million into the decriminalization campaign, far outspending the $95,000 raised by opponents. The organization receives support from billionaire philanthropist and investor George Soros, who is on the alliance board. Other major funders of the effort included Facebook founder and CEO Mark Zuckerberg, who along with his wife Priscilla Chan gave $500,000, and the American Civil Liberties Union of Oregon, which gave $150,000, and national ACLU, which gave another $150,000, per state campaign finance reports. Source 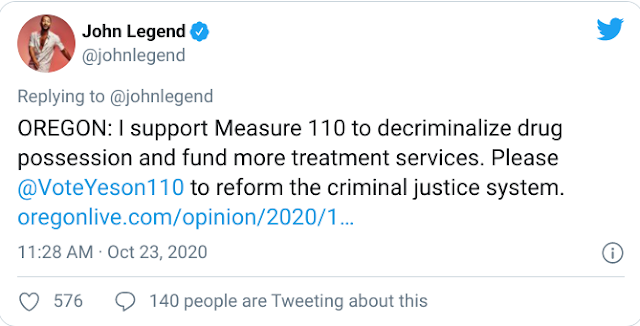 "I protest highly against a different text, which people may dare publish after my death. I protest once more against the very false statements of all those who dare say and write First that I embroidered the Secret; second, against those who state that the Queen Mother did not say to transmit the Secret to all her people." Mélanie
at November 04, 2020