U.K. supermarkets using cardboard cutouts to hide gaps left by supply issues
U.K. supermarkets are using cardboard cutouts of fruit, vegetables and other groceries to fill gaps on shelves because supply problems combined with a shift towards smaller product ranges mean many stores are now too big. Tesco has begun using pictures of asparagus, carrots, oranges and grapes in its fresh produce aisles, prompting ridicule on social media. “Mmmm, delicious photos of asparagus,” one commenter wrote on Twitter. Another mocked an oversized picture of the vegetable piled up: “I love that asparagus grows to this size in the UK. It’s our climate, I’m sure.” Shoppers have spotted fake carrots in Fakenham, cardboard asparagus in London, pictures of oranges and grapes in Milton Keynes, and 2D washing liquid bottles in Cambridge. Sainsbury’s has also used outline drawings of packaging to fill shelves. 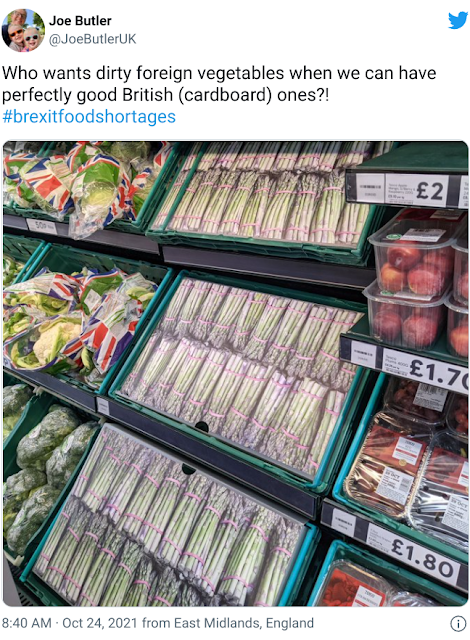 The tactic comes as shortages of HGV drivers and pickers and packers on farms and food processing plants lead to low availability of some items in supermarkets. Problems at ports, where handlers are struggling to cope with a surge in deliveries for the festive season, are also leading to shortages. Bryan Roberts, a retail analyst at Shopfloor Insights, said he had only begun to see the cardboard cutouts of fresh produce in the past year, but said similar tactics had been in place elsewhere in supermarkets for some time. “It has become quite commonplace. It is not only because of shortages, but because a lot of the larger stores are now simply too big.” He said the cutouts were one of an array of tactics being used to fill space, including filling meat fridges with bottles of tomato sauce or mayonnaise, spreading packs of beer out across whole aisles, and erecting large posters or other marketing material. Tesco, which has boasted that its sales have been boosted by its ability to keep shelves stocked, said the fruit and vegetable pictures were not linked to the recent supply chain issues and had been in use for many months. Source