First Summer Explosion: Muslim Bomb Maker's House Exploded In Birmingham UK - Where There Are Over 200 Mosques!

I call this the first explosion for the Summer.
Gas explosion?
A man is fighting for his life and four others have been injured after a huge explosion destroyed a house in Birmingham. West Midlands Police said they were called just after 8.30pm on Sunday to the incident on Dulwich Road in Kingstanding. One house has been destroyed and several others have been significantly damaged as well as nearby cars, the force said. West Midlands Ambulance Service said people at the scene rescued a man from the destroyed house but he had 'very significant injuries' and was taken to hospital. Four other men suffered minor injuries and were assessed by ambulance crews at the scene, WMAS added. A spokesperson said: 'A man was helped from the property by people at the scene but had suffered very serious injuries. 'After assessment and treatment at the scene, he was taken on blue lights to the major trauma centre at Queen Elizabeth Hospital Birmingham with the MERIT team travelling with the ambulance. 'His condition on arrival at hospital was described as life threatening. 'Four further men have been assessed by ambulance crews for minor conditions but have been discharged at the scene. 'Members of the Hazardous Area Response Team continue to work with specialist firefighters at the scene.' Emergency services said evacuations were taking place and people have been urged to avoid the area, with Dulwich Road and surrounding roads closed. Emergency services said the cause of the fire is not yet known. West Midlands Fire Service (WMFS) said West Midlands Police, WMAS, Cadent Gas and the National Grid were all working to manage the incident. Six fire crews, three ambulances, five paramedic officers and a National Inter-Agency Liaison officer were among the resources sent to the scene. Source 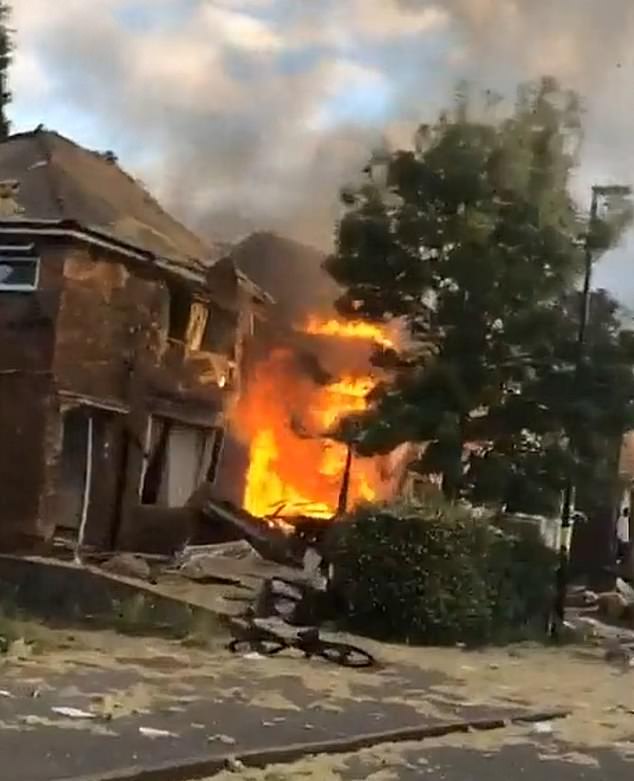