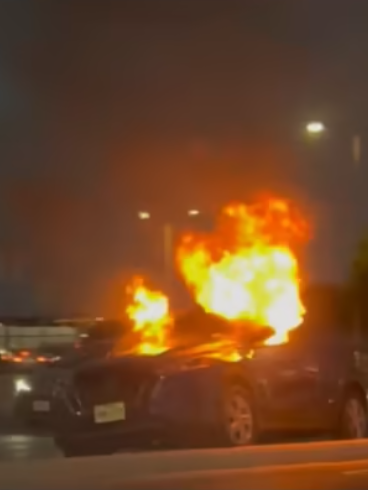 Rental Car Explodes Near TX Airport
A rental car “exploded as if it contained ammunition” near a Texas airport after a man set it on fire, according to local reports. Authorities say a 35-year-old man set the vehicle on fire at a gas station near the San Antonio International Airport before driving toward the terminals over the weekend, KENS reported. As the car became immersed in flames, officials say the suspect escaped and ran away, according to WOAI. The car then exploded like it was full of ammo, police said, according to the San Antonio Express-News. Police and firefighters were called to the explosion in the 9000 block of Airport Boulevard at about 10 p.m. Saturday, June 11, KSAT reported. Nobody was found inside the vehicle, and no one reported any injuries. Authorities used surveillance videos to find the suspect, WOAI reported. He was later arrested by San Antonio Airport Police outside Terminal B. He faces an arson charge, KSAT reported, and the investigation is ongoing. Source
at June 13, 2022