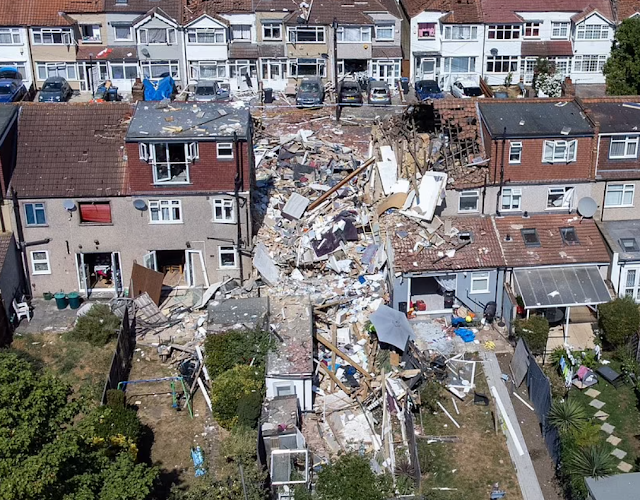 Race against time to rescue 'four-year-old girl still trapped inside' house reduced to rubble in massive gas explosion neighbours said sounded 'like a bomb had gone off' as 40 homes evacuated and major incident declared
Emergency services are searching for a four-year-old girl believed to be trapped after a terraced house collapsed following a huge gas explosion and fire in south London this morning. Neighbours said it sounded 'like a bomb had gone off' on Galpin's Road in Thornton Heath, near Croydon, just after 7am this morning, as 40 firefighters and six fire engines quickly rushed to the scene. Three people have been hospitalised with potentially life-threatening injuries and the fire brigade confirmed their urban search and rescue crews are searching for one more missing person. Merton Council has declared a major incident and confirmed it was a gas explosion. Utility repair and maintenance works were being carried out on the road by Southern Gas Networks, who have been contacted by Mail Online for a comment. Two neighbours, Kutoya Kukanda, 50, and Delroy Simms, 62, who have been called have been called 'heroes' for rescuing three children from the rubble at around 7am, said they feared a young girl was still trapped inside. Mr Simms, dressed in his pyjamas by the cordon, said the explosion was like an earthquake and knew what it was because 'that gas was smelling all week, really strong'. He said that Mr Kukanda passed children out to him as bricks were still falling from the structure. Videos and pictures shows the house completely reduced to rubble, planks of wood strewn about, and neighbours standing shocked outside in their dressing gowns. Surrounding properties and vehicles are seriously damaged with tiles and bricks from the destroyed housing laying on top of them. Around 40 properties have been evacuated as a precaution and a 50-metre cordon is in place. One man was treated for burn injuries at the scene and witnesses said other people including a child were stretchered away, Thornton Heath Chronicle reported. A young girl was also seen stood outside with a blanket being treated for burns, as three people are currently in hospital with potentially life-threatening injuries. London Fire Brigade (LFB) said four people have been rescued and are asking people to avoid the area. Source
at August 08, 2022