Investigators are looking into whether the man who tried to breach the F.B.I.’s field office in Cincinnati on Thursday had ties to extremist groups, including one that participated in the Jan. 6 attack on the Capitol, according to two law enforcement officials familiar with the matter. The suspect, identified by the officials as Ricky Shiffer, 42, seems to have appeared in a video posted on Facebook on Jan. 5, 2021, showing him attending a pro-Trump rally at Black Lives Matter Plaza in Washington the night before the Capitol was stormed. In May, a Twitter user named Ricky Shiffer replied to a photograph of rioters scaling the walls of the Capitol on Jan. 6 with a message that claimed he was present at the building and seemed to place the blame for the attack on people other than supporters of former President Donald J. Trump. Source NYT

Armed man who attacked FBI's Ohio field office is dead after five-hour standoff: Suspect also attended deadly Capitol Riot
Law enforcement officers have killed the armed man who attacked the FBI's field office in Cincinnati, Ohio. Ricky Walter Shiffer was shot dead by police Thursday after raised a gun towards officers around 3pm, state highway patrol confirmed. Shiffer had attempted to break into the office, prompting a five-hour standoff with authorities. The body armor wearing suspect fled the office and was chased onto highway before abandoning his car by a cornfield on a country road just off of Interstate 71. The confrontation came as officials warned of an increase in threats against federal agents in the days following a search of former President Donald Trump's Mar-a-Lago estate in Florida. Investigators say Shiffer was also at the US Capitol during the January 6 insurrection. 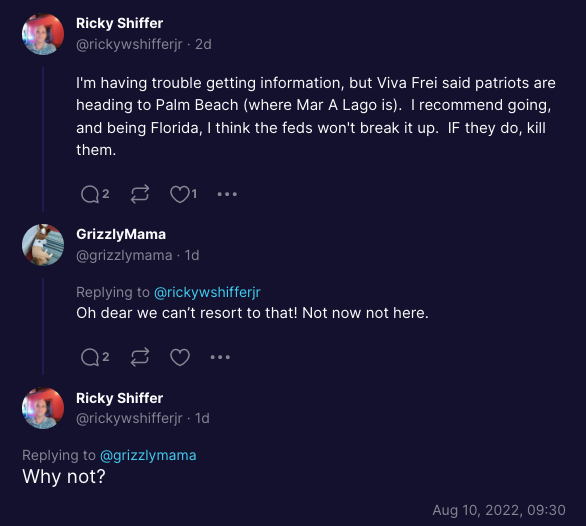 The ordeal started after the FBI reported that an armed suspect tried to breach the agency's Visitor Screening Facility at its headquarters in Cincinnati. Sources told NBC News that he was armed with an AR-15 style rifle and fired a nail gun at personnel. After agents rushed to scene amid blaring alarms, the agency said the suspect fled by car north onto I-71, where police were on pursuit. The Clinton County Emergency Management Agency said the man exchanged gunfire with officers near a cornfield by Smith and Center Road, Wilmington, Ohio. State highway workers blocked off roads leading to the scene as a helicopter flew over the area. Officials locked down a mile radius near the interstate and urged residents and business owners to lock doors and stay inside. The interstate has been reopened. Two days before Shiffer attempted to breach the FBI facility an account on Trump's Truth Social platform linked to his name seemingly foreshadowed the attack. Schiffer called on his followers to 'kill the FBI on sight' in wake of the agency raiding the former president's Florida estate. 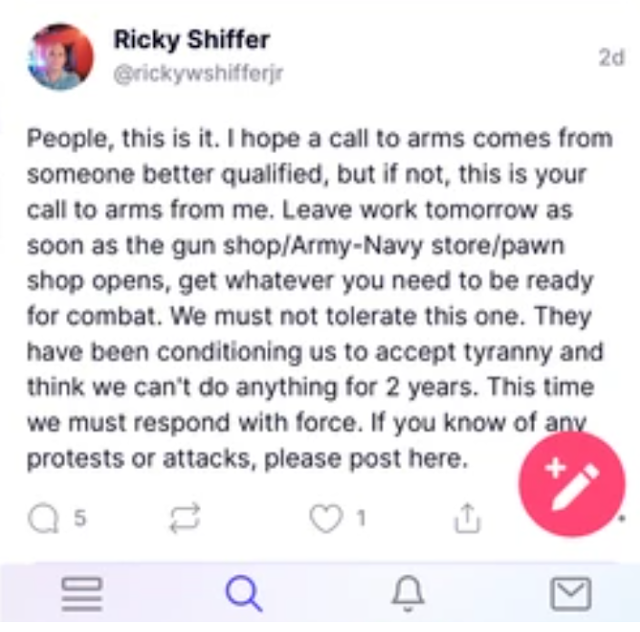 'People, this is it,' the account posted. 'I hope a call to arms comes from someone better qualified, but if not, this is your call to arms from me. Leave work tomorrow as soon as the gun shop/Army-Navy store/pawn shop opens, get whatever you need to be ready for combat. We must not tolerate this one.'Thursday morning around 9.29am, around the same time the FBI office was breached,  Schiffer's account posted: 'Well, I thought I had a way through bullet proof glass, and I didn't. 'If you don't hear from me, it is true I tried attacking the FBI, and it'll mean either I was taken off the internet, the FBI got me, or they sent the regular cops while.'Officials said the incident began on Thursday morning when Schiffer got into an altercation with security officers at the FBI office, CNN reported. The agency said in a statement that 'the activation of an alarm and a response by armed FBI special agents' led the man to flee the scene in his car. The vehicle eventually came to a stop and gunfire was exchanged between the suspect and police officers, Nathan Dennis, a spokesperson for the Ohio State Highway Patrol, said in a news conference. No police were injured. 'Throughout the day today law-enforcement officers attempted to negotiate with the suspect. After a time the negotiations failed,' Dennis said. 'The suspect then did raise a firearm toward law enforcement and shots were fired by law enforcement officers on the scene,' Dennis said. Authorities said the suspect died at the site. The agency and its Cincinnati office did not immediately respond to DailyMail.com's request for additional information. Source 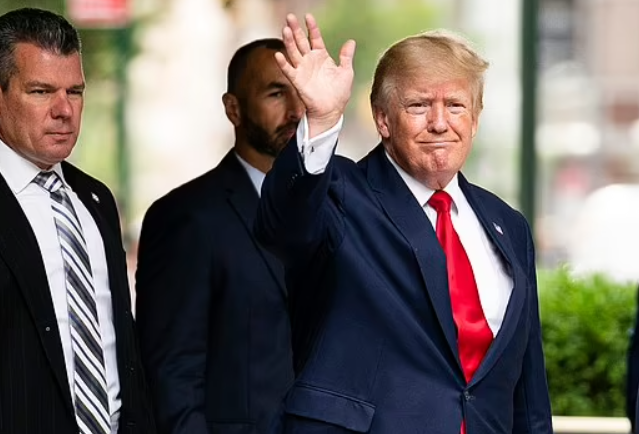