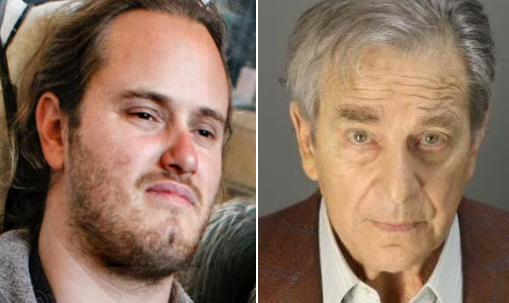 Gay Hook Up Gone Wrong?
Elon Musk DELETES tweet to Hillary Clinton suggesting Paul Pelosi's attacker was gay prostitute: News site behind story once claimed Hillary died and was replaced by body double in 2016
Elon Musk has now deleted a tweet suggesting Paul Pelosi's attacker was a gay prostitute he met during a boozy night out. The tweet sharing a link to an article suggesting the House Speaker's husband left a San Francisco gay bar with David DePape prior to his assault no longer appears on the new Twitter CEO's page — just hours after it was posted. He has now been accused of 'caving into the leftist mob.' Musk had posted the theory in response to a tweet by former Secretary of State Hillary Clinton, in which she claimed that the attack on the 82-year-old was the fault of Republican 'mouthpieces' spreading 'hate and deranged conspiracy theories.' 'There's a tiny possibility there may be more to this story than meets the eye,' the 51-year-old billionaire responded, sharing a link to a story published by an obscure outlet called the Santa Monica Observer. It seemed to have crashed since the story was first highlighted by Musk, with would-be readers receiving an error page reading that the site's webserver, Cloudflare, was 'returning an unknown error' according to Axios. According to the LA Times, the same outlet previously reported that Hillary Clinton died before the 2016 election, and that a body double had been sent to debate Donald Trump. It also claimed that sunlight could treat COVID, and that Kanye West had been appointed to the Trump administration. 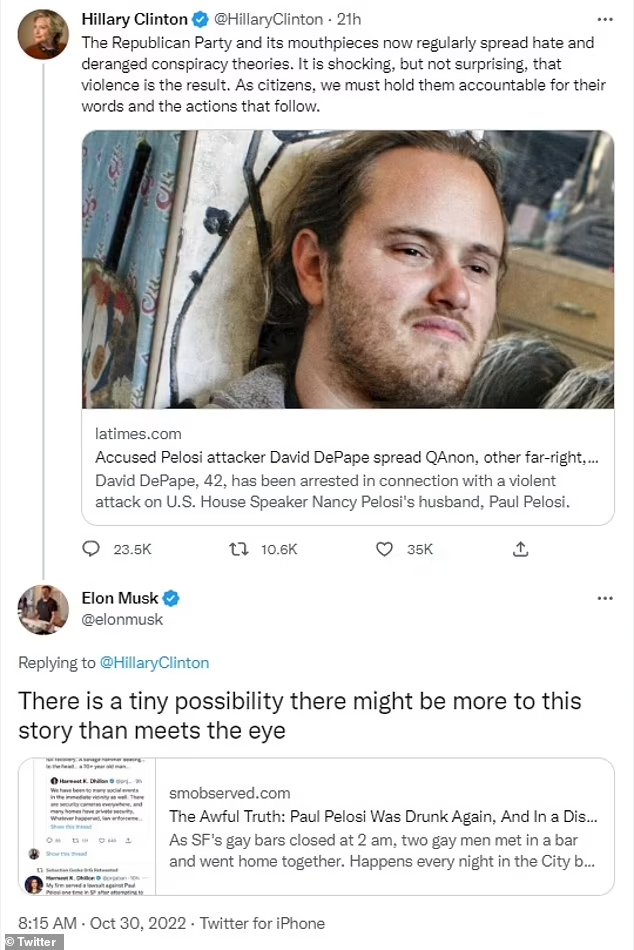 The latest story, which can still be accessed in an online archive, was headlined: 'The Awful Truth: Paul Pelosi Was Drunk Again, And In a Dispute With a Male Prostitute Early Friday Morning.' Author Stan Greene wrote: 'As SF's gay bars closed at 2 am, two gay men met in a bar and went home together. Happens every night in the City by the Bay. Except one of these two men, was married to House Speaker Nancy Pelosi. 'I might disappear for telling you the truth. If I do, you'll all know why. But here's what really happened early Friday morning in San Francisco. IMHO 'According to SFPD "RP [Reporting Person] stated that there’s a male in the home and that he’s going to wait for his wife. RP stated that he doesn’t know who the male is but he advised that his name is David, and that he is a friend,” the dispatch official said. “RP sounded somewhat confused.” 'It's been a rumor for years in SF that Paul Pelosi is gay. David Depape is said to be a Castro Nudist. "The lunatic who allegedly assaulted Paul Pelosi is a Berkeley resident and a 'Former Castro Nudist Protester' and hemp 'jewelry maker' ...sounds totally MAGA Republican to me." this from Twitter.' Greene offered no evidence to back up his claims, and police have not shared any information which confirms any of the claims made. Pelosi was previously sentenced to five days in jail in August after he crashed his Porsche while drunk this year, but there's no suggestion that he's gay or an alcoholic. Musk's decision to share such an outlandish theory sparked fury on Twitter, just days after he bought the site and vowed to make it a paragon of free speech. He had written in a message to advertisers on Thursday that while he wants the social media giant to become a 'digital town square' it 'obviously cannot become a free-for-all hellscape, where anything can be said with no consequences.' Source
at October 30, 2022