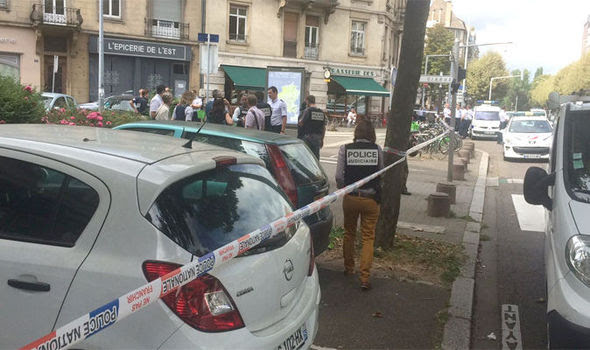 A JEWISH rabbi has been stabbed by an attacker shouting "Allahu Akbar" in the city of Strasbourg, sparking fears France has fallen victim to another Islamist-inspired terror attack. The attacker, who is understood to have been arrested, shouted the Islamic phrase meaning God is great during the attack, according to reports in French media. The 62-year-old victim, who is described as belonging to the orthodox Hasidic sect, was injured in the attack in the Jewish Quarter, 500 metres from the Great Synagogue of Strasbourg. Named locally as Chalom Levy, he took refuge in a nearby bar befofe being taken to hospital. Mendel Samama, a Strasbourg rabbi who visited him at the hospital, said Mr Levy described surviving the attack as a “miracle”.He said: “He was shocked. He is weak. He was hit in the abdominal region a few centimetres from a vital organ.” Mr Levy was said to be wearing items of clothing that would identify him as a Hasidic Jew. Initial reports said the perpetrator was suffering from psychological problems and was known to the authorities for carrying out a similar attack in 2010. The incident on Friday morning is the latest in a string of religiously-motivated attacks on French soil. Express Read More>>>>>>