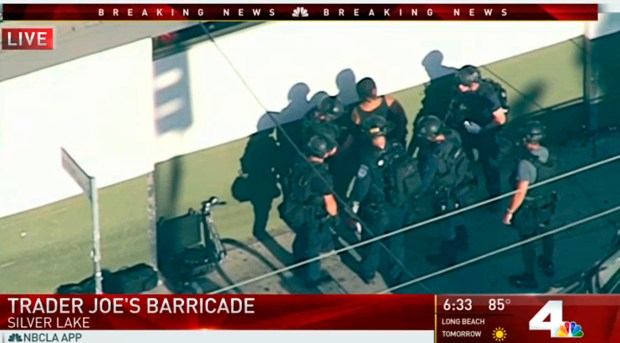 Following up the Evil Portents for America this past week:

A woman was shot dead when a 28-year-old man stormed a Trader Joe's in Los Angeles on Saturday afternoon and held hostages for three hours before surrendering to police.  The woman, Mely Corado, was killed early into the hostage situation, police told reporters on Saturday night, and was the only fatality of the day. Mely had worked at Trader Joe's since 2014.  LAPD sources told ABC7 Mely was the store manager.  The gunman allegedly shot his grandmother 'up to seven times' before fleeing in her car with a woman believed to be his girlfriend, LA Mayor Eric Garcetti said.  Garcetti said the suspect got into an argument with his grandmother about 1.30pm, and the woman believed to be his girlfriend, who was 'forcibly taken' with him, was also injured but is expected to survive.  The man's grandmother was transported to hospital in 'grave condition', has undergone several surgeries and remains in a critical condition, LAPD Chief Michael Moore said.  Source