MUSLIM Goes On A Stabbing Spree In London Killing TWO 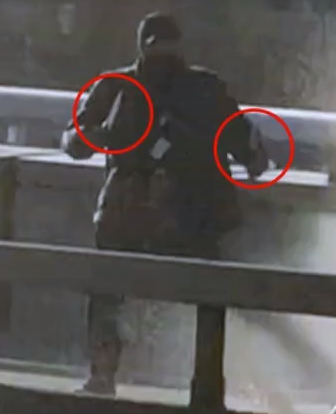 This is the moment that a brave bystander used a fire extinguisher to tackle a knifeman wielding two weapons on London Bridge this afternoon. Two people were killed today and up to twelve were injured after the maniac pulled the knives on innocent people on the north side of London Bridge just before 2pm. Video footage showed the attacker running across London Bridge clutching the weapons as a fearless member of the public trailed him. The white-haired man then confronted the terrorist who turned to him, holding up the two knives, before being cornered by the group of civilians chasing after him The man who was chasing the black-capped killer over the bridge then unleashed a powerful spray of water on him from the fire extinguisher. The terrorist was then bundled to the ground as other people waded in, while another man hurried away with his knife. Another man was also seen pointing a large stick at the terrorist. One witness at the scene said the stick had in fact been a Narwhal whale tusk and that the man had taken it from Fishmongers' Hall and ran out with it after learning of the incident. The attacker, who has not yet been identified by police was thought to have had one of the two knives strapped to his arm and had also been wearing a fake explosives device, which was strapped around his waist. It is believed he was a convicted terrorist who had served time in prison and was wearing an electronic tag, according to The Times newspaper. The paper added he was attending a Cambridge University conference on prisoner rehabilitation being held at Fishmongers' Hall and 'threatened to blow up' the building. Metropolitan Police Chief Cressida Dick confirmed this evening that two stabbing victims had died and three injured people were being treated in a hospital. Source 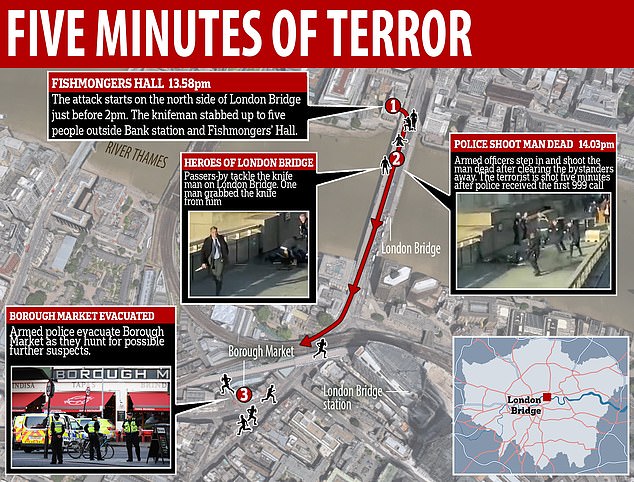