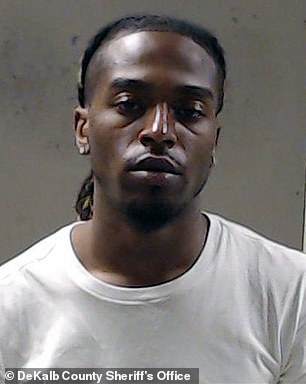 Cops originally said he was Hispanic.
Why?
Does he look Hispanic?
Maybe this is a trend - Black BLMers driving on Golf Courses looking to kill whitey
Man, 23, charged in Georgia golf course triple homicide was arrested just hours after the shootings on DUI and other charges - but was released
The suspect who was arrested over the killings of a pro golfer and two others on a Georgia golf course had been taken into custody hours after the triple homicide on DUI and other charges before then being released. Bryan Anthony Rhoden, 23, was charged late Thursday with murder, aggravated assault and kidnapping following a five day manhunt over the July 3 shooting deaths at Pinetree Country Club in suburban Atlanta. Rhoden allegedly shot 46-year-old Gene Siller, who was director of golf at the club, in the head near the 10th hole after police said the golf pro 'witnessed an active crime' unfolding. Police who arrived at the scene later discovered the bodies of two men - Paul Pierson, 76, of Kansas; and Henry Valdez, 46, of California - in the back of a white Ram 3500 pickup truck that Rhoden had allegedly driven onto the course. The gunman fled the scene of the triple homicide on foot and police refused for days to release any details of a potential suspect. Source
at July 09, 2021