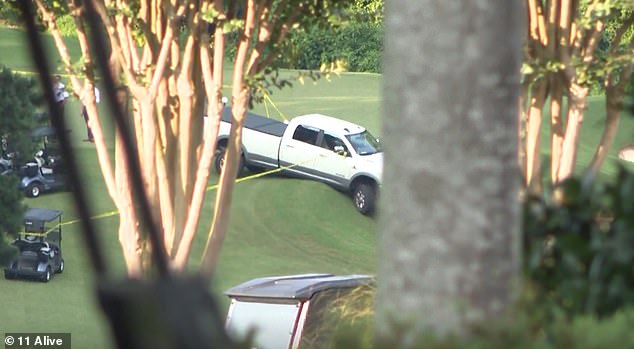 Mexican - probably a groundskeeper.....
Gunman Who Shot And killed Pro-Golfer, 41, At Georgia Country Club After Driving Onto A Green Had Two Other Bodies Stashed In Back Of Stolen Truck
The gunman who shot and killed a pro golfer at a Georgia country club on Saturday reportedly had two other bodies stashed in the back of his pickup truck, and remains on the loose. Authorities said they found the additional bodies shortly after arriving on the scene of the deadly shooting of golfer Eugene Siller, 41, at the Pinetree Country Club, where he reportedly tried to stop the pickup truck from driving onto the green, and the driver shot him in the head. The shooter fled the scene, but police said they found two men dead from gunshot wounds in the back of the truck. One of the bodies was identified as Paul Pierson, the registered owner of the truck, Cobb County police spokeswoman Shenise Barner told the Atlanta Journal-Constitution, while the other remained unidentified.

The Georgia State Golf Association initially identified Siller, a pro golfer, golfing instructor and Director of Pinetree, as one of the victims on Saturday evening. 'All of us at the GSGA are deeply saddened by the tragic events that occurred earlier today at Pinetree CC. Our thoughts and prayers are with Gene Siller's family and friends,' the Georgia State Golf Association tweeted. The Georgia PGA also issued a statement offering its condolences on Twitter: 'Tragedy has stricken the Georgia Section PGA in the loss of our Member, Gene Siller. Thoughts and prayers for his family and the Pinetree Country Club family.' Source
at July 05, 2021