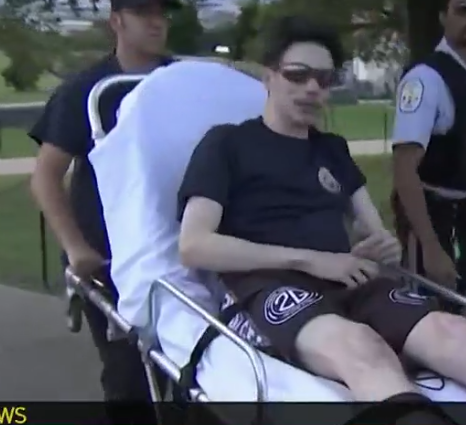 It was a white guy who hates social media...

Man Who Drove Into Crowd at Washington Monument Charged

Witnesses said a man was driving erratically, doing figure 8s and at one point got out of the SUV and appeared agitated The driver who witnesses say accelerated toward pedestrians near the Washington Monument Saturday has been charged with attempted assault with a dangerous weapon, according to U.S. Park Police. Authorities responded the incident after several witnesses said an erratic driver who wanted to hurt someone crashed and ended up in the pedestrian walkway. D.C. Fire and EMS spokesperson Vito Maggiolo confirmed first responders were dispatched to a crash at 2 15th Street at the Washington Monument at 7:40 p.m. The fire department confirmed no pedestrians were injured. The driver was transported to a local hospital with minor injuries, U.S. Park Police said. Witnesses told News4’s Cory Smith that a driver accelerated toward a group of pedestrians and looked like he was attempting to hit them. "My son and I were kind of like, 'What’s going on? That seems weird.' It looked like he was looking for an exit and then all of a sudden it turned to, no... there is something wrong here," Nicholas Kline said.

The man was driving erratically, doing figure 8s and at one point got out of the SUV and appeared agitated, onlookers said. "He was going down the walkway and people were running out of the way. And then he ran right into that wall, literally just missing somebody by I would say a foot," Kline said. "She wasn’t able to jump up. Somebody was dragging her, pulling her up." After the crash, Michael Vachon, who lives nearby, pulled the driver out of the vehicle. Vachon said he asked the driver what his problem was, and he responded, "I'm dying." "And he was like, 'The government is trying to kill me.' I'm like, 'The government is not trying to kill you. Lie down,'" Vachnon said. The suspected driver was conscious and talking as he was wheeled into an ambulance. After a bystander asked him about his motive, he said expletives about Facebook, Google and Twitter. After securing the scene, explosive sniffing dogs were brought in to search the vehicle. It is unclear what charges, if any, he faces. More details about the crash and the driver were not provided.The Washington Monument has been closed since late January and will remain closed on the Fourth of July, but large crowds had already started to gather in the area ahead of the holiday. Source