The President of Haiti has been shot dead at his home, it was confirmed today. Jovenal Moise was killed in a nighttime raid at his property in the capital Port Au Prince by mystery Spanish-speaking gunmen. A statement from Haiti’s interim prime minister, Claude Joseph, said the deadly attack took place in the early hours of this morning. “A group of individuals who have not been identified, some of whom were speaking Spanish, attacked the private residence of the President of the Republic and fatally injured the Head of State," he said. He added that Haiti's First Lady was also shot but has survived the attack. Source

Trying to relive the glory days of the time spent in the Situation Room during the Osama Bin Laden Raid?

Though I can't image that Biden was up in the wee hours of the morning.

No. Biden just signed off on the arrest of  Jovenel Moise 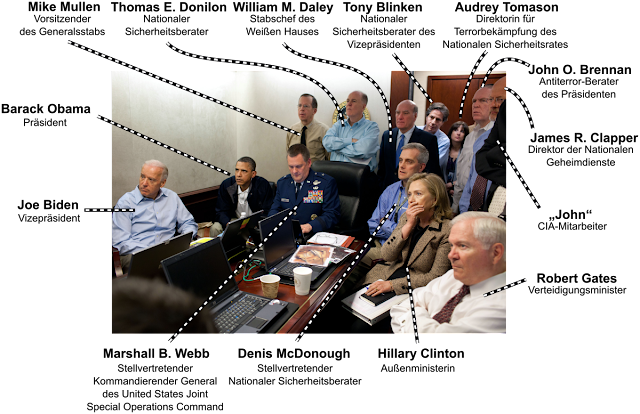 "Stand down this is a DEA operation.....

Of course Biden condemns the killing because it was supposed to be an arrest.....

U.S. condemns 'heinous' assassination of Haitian leader, says it is ready to help

WASHINGTON, July 7 (Reuters) - U.S. President Joe Biden said on Wednesday he was shocked by the "heinous" assassination of Haitian President Jovenel Moise and wounding of his wife in their home, and administration officials said Washington was to ready help investigate what happened. Moise, 53, was shot dead and his wife Martine left in critical condition after unidentified gunmen opened fire with assault rifles in his private residence overnight, stirring fears of chaos in the impoverished Caribbean nation already reeling from rampant gang violence and facing a constitutional crisis. "We condemn this heinous attack and I am sending my sincere wishes for First Lady Moise's recovery," Biden said in a statement. "The United States offers condolences to the people of Haiti and we stand ready to assist as we continue to work for a safe and secure Haiti." "We need a lot more information but it's just, it's very worrisome about the state of Haiti," Biden told reporters at the White House.
.
Haiti's ambassador to the United States, Bocchit Edmond, told Reuters in an interview that his government would welcome U.S. security assistance in the wake of the assassination. Edmond said the gunmen falsely identified themselves as agents from the U.S. Drug Enforcement Administration (DEA), citing video footage the government has in its possession, but added, "No way they were DEA agents." State Department spokesman Ned Price said reports the attackers were DEA agents were "absolutely false." Source
Looks like Jovenel Moise shot and killed four before he was murdered:
Haiti's Police Chief Léon Charles said late Wednesday that three police officers had been taken hostage by the suspected assassins, but were safely rescued after a police shootout with the suspects. Charles indicated that more suspects were still at large in addition to the four killed and two arrested, whose identities and nationalities were not immediately available. 'The police are engaged in a battle with the assailants,' he said at a news conference. 'We are pursuing them so that, in a gunfight, they meet their fate or in gunfight they die, or we apprehend them.' Source
If not a planned arrest by the DEA then why was there no gunfight immediately before they gained  entry?
What?
Jovenel Moise didn't have a security detail?
Why send 30 or more men to do an assassination when only one man is needed to do the job?
And what was the purpose of this "assassination"?
To install a new leader?
No.
This was a planned arrest by the Biden Administration - they didn't expect Jovenel Moise  to shoot back.