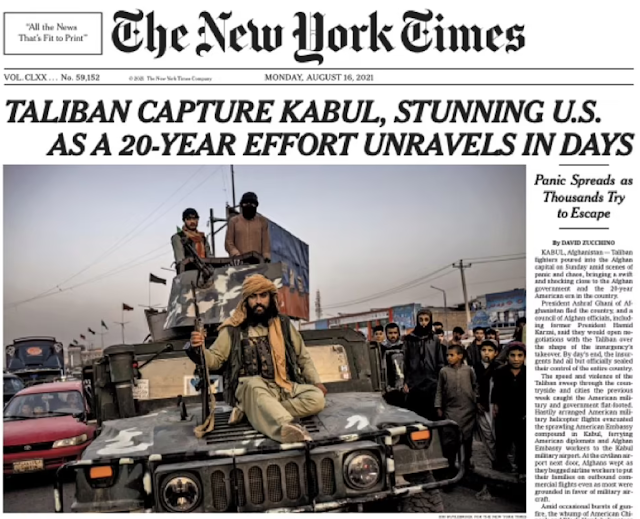 Biden's statement 'washing hands' of Afghanistan 'is one of most shameful in US history': Left and right-wing media unite in condemnation of America's 'chaotic retreat' and 'betrayal' of Afghan people
Media outlets across the political divide in the US and Britain have united in their condemnation over Joe Biden's handling of the Afghanistan crisis amid what is being billed the biggest foreign policy catastrophe in 65 years. Even Left-wing outlets such as CNN and The New York Times that would traditionally back a Democrat president have hit out at Mr Biden for his role in allowing insurgents to take Kabul after routing Afghan forces in just a week. The Wall Street Journal condemned Joe Biden's statement 'washing his hands' of the situation, saying it should 'go down as one of the most shameful in history by a Commander in Chief at such a moment of American retreat'. mAs the crisis deepened, a CNN columnist said the 'debacle of the US defeat and chaotic retreat in Afghanistan' was a 'political disaster' for the US President and slammed his 'failure to orchestrate an urgent and orderly exit'. And an opinion writer in The Atlantic said there was enough blame attached for the Afghanistan crisis to 'fill a library of books', condemning the 'betrayal' of the Afghan people as he placed the 'burden of shame' on Mr Biden. Meanwhile a New York Post editorial said Mr Biden's claims that he 'inherited' his predecessor Donald Trump's withdrawal plans were a 'lie' and the situation is 'as humiliating an end as the rooftop scramble in Saigon in 1975'. 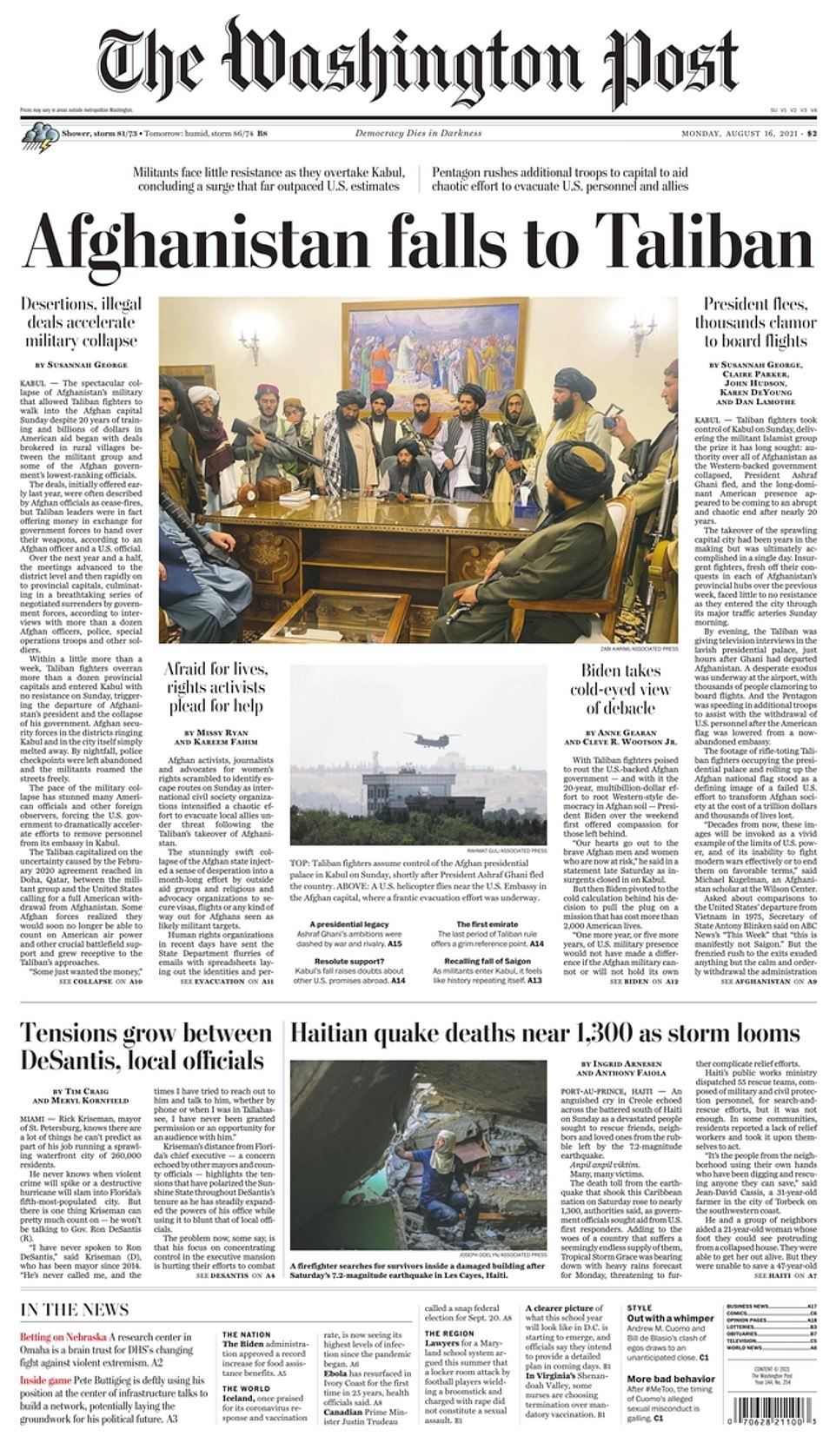 An opinion piece in The New York Times claimed that Mr Biden would 'go down in history, fairly or unfairly, as the president who presided over a long-brewing, humiliating final act in the American experiment in Afghanistan'. A Washington Post column said the situation 'is on Biden, and it will leave an indelible stain on his presidency', while a piece in USA Today said 'this catastrophe is appearing on his watch, and he will have to take his lumps'. Fox News ran a comment from Republican Senator Joni Ernst condemning the 'slap in the face to the thousands of men and women who served in this war' and a 'total abandonment of a country and its people' by Mr Biden. Columnists in the British Press also hit out at Mr Biden today, with The Sun's editorial saying he 'ignored repeated warnings, then withdrew crucial air support for the Afghan army it has spent billions arming over 20 years'. Commons Foreign Affairs Committee chair Tom Tugendhat wrote in The Times that it was the 'the biggest foreign policy disaster since Suez' in 1957, while a columnist for the i condemned the 'betrayal of Afghanistan's people'. The Financial Times said the 'abandonment of Afghanistan raises doubts over the depth of US commitment to supposed allies', while Mark Almond wrote in the Daily Mail that Islamist fundamentalism is now 'back on a roll'. Source 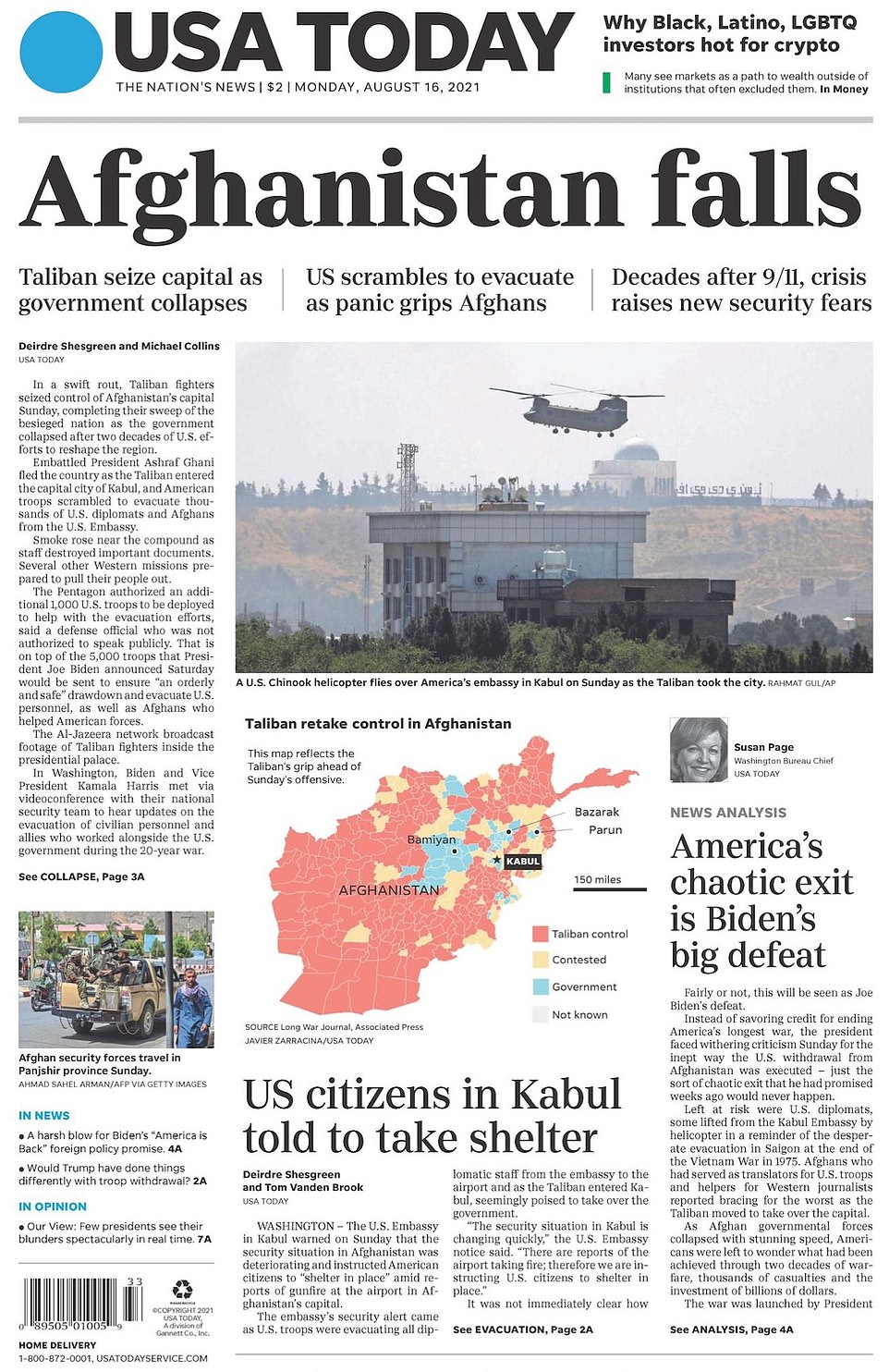