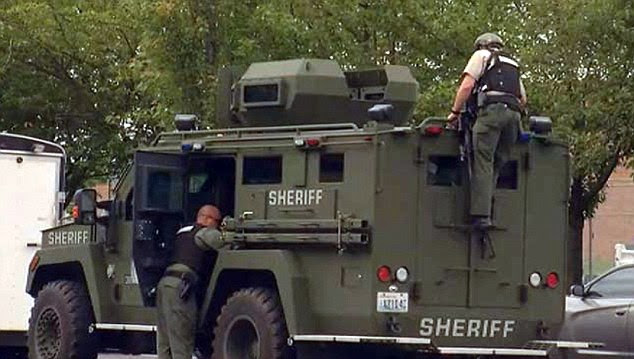 A student has been shot dead after a gunman reportedly armed with a semi-automatic weapon opened fire in the gymnasium of Reynolds High School in Portland, Oregon. The shooter is also dead and at least 100 police SWAT and emergency personnel rushed to the scene shortly after 8am. Frantic parents - some still wearing pajamas - arrived at the school gates after hearing about the incident on morning local news. A Multnomah County sheriff's office spokesman confirmed they have responded to an active shooter situation and that the suspect is dead - but that the school will be in lockdown until early afternoon, local time. 'I'm very, very sorry for the family and for everybody who has been impacted by this tragic incident,' police chief Scott Anderson said at a 10am press conference. The Multnomah County sheriff's office confirmed there were reports of shots fired about 8 a.m. at Reynolds High School in Troutdale. Students say they were told over the intercom there was a lockdown and to quietly go to their classrooms. Students were evacuated from the school, hands on their heads, to be reunited with their relieved parents in a supermarket parking lot. Daily Mail Read More>>>>>