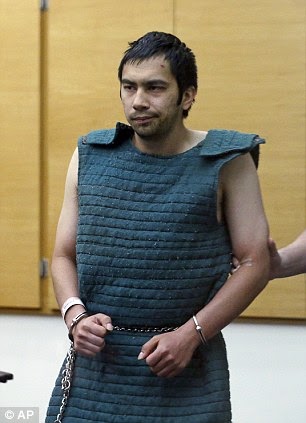 The attorney for a former janitor suspected of killing one student in a shooting rampage at a small Christian Seattle university says he's sorry for the suffering he has caused. Public defender Ramona Brandes says Aaron Ybarra, 26, is on suicide watch at the jail. She says he has longstanding mental health issues and has been treated and medicated in the past, though she did not know his specific diagnoses. Mountlake Terrace Police say Ybarra was hospitalized twice in recent years for mental health evaluations. In 2010 and 2012, Ybarra was transported to a hospital after being found drunk. In the October 2012 incident, police officers found him lying in a roadway. His attorney says her client wants to apologize for his actions, which left one person dead and two others wounded. On Friday, authorities identified the student gunned down by Ybarra as Seattle Pacific University freshman Paul Lee, 19. Shooting victim Sarah Williams, 19, was listed in critical but stable condition Friday, and 24-year-old Thomas Fowler was in stable condition. Police say Ybarra wanted to kill more people before turning the gun on himself. Daily Mail Read More>>>>

Now BLM get angry when you do have your dog leashed

What? BLM dog walking service.
pic.twitter.com/z3uZEDYusz — Shoe Gazing Underground 🍥☦️🎷🎺🎻🎹🎼🎧🎤🎬 (@AltPost) July 4, 2020
Video shows woman swinging puppy on leash as a weapon in road rage incident Police in Canada are investigating an animal cruelty incident after a woman was caught swinging a small dog on a leash as a weapon. Dashcam video captured by a motorist in Dartmouth, Halifax, shows a female driver taking the pet from its owner. She then beats the owner with her own pooch.
The incident occurred on July 1. Police rushed to the scene after hearing reports of an altercation between four women.
“The altercation started after two females in one vehicle confronted two females in the second vehicle,” Halifax police said. One of the cars got cut off in a drive-thru, police said.
At the time of the incident, no one involved wanted to pursue charges, police say. Pol…
Post a Comment
Read more