The dead Black Muslim had a Missouri drivers license.

One of the police officers is black -  Montrell Jackson.

This was not a racist attack, it was a Muslim Jihad attack.


A Grandview High School classmate tells KCTV5 that Long converted to Islam three years ago. He said Long was quiet and nice.KCTV5

Gavin is a Muslim convert with Ethno-Nationalist political views. (See his videos at end of this post.)

BATON ROUGE - Two Baton Rouge Police officers and a East Baton Rouge Sheriff's Office deputy are dead following a Sunday morning shooting on Airline Highway. Another three officers have been reported wounded, but the extent of those injuries has yet to be made available. Authorities have confirmed that one suspect is dead while two others remain at large. Law enforcement encouraged any citizens who see anything suspicious to contact police as soon as possible. Residents were encouraged to stay indoors until the remaining suspects are in custody. Police said the public should keep an eye out for suspicious subjects in black or camouflage clothing and notify authorities immediately. Police detained two suspects in Addis and transported them back to the BRPD Violent Crimes Unit. Sources said the subjects headed to the Port Allen Walmart to change out of all black clothing before they were taken into custody. They're being questioned in relation to the deadly shooting. WBRZ Read More>>>>

Three police officers have been killed after at least six were shot by a masked gunman in Baton Rouge - less than two weeks after the killing of Alton Sterling in the same Louisiana city. The man, who was wearing black, was seen firing indiscriminately at around 9am as he walked out between a shop and a car wash, a witness told WBRZ. Police received a 911 call reporting a 'suspicious person walking down Airline Highway with an assault rifle', the source said. At least one gunman is said to have opened fire when cops arrived. A suspect has been shot dead and police say two others may be at large following what appears to have been an ambush. Three officers have been confirmed dead. Four more have been injured and one is in a critical condition in hospital. The shooting took place at a gas station less than a mile from Baton Rouge's police headquarters shortly before 9am. Daily Mail Read More>>>>>>>


President Obama got word that the Baton Rouge sniper is a Muslim. 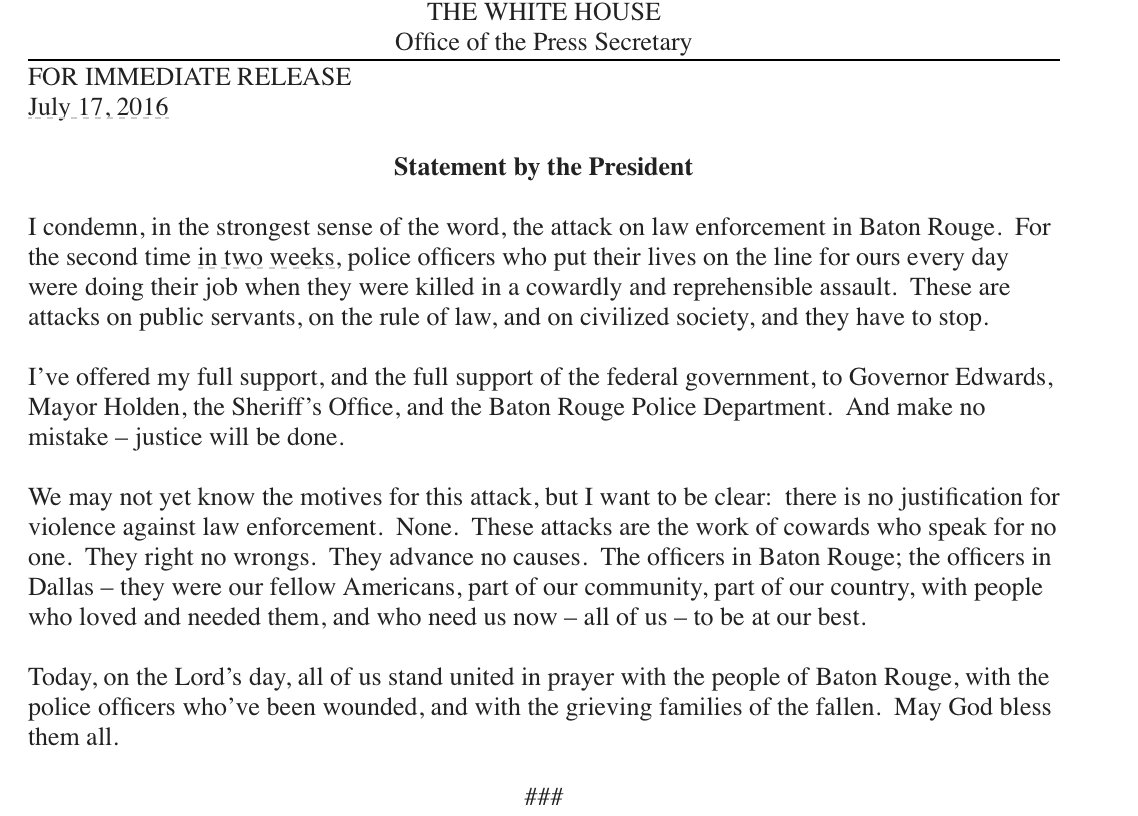