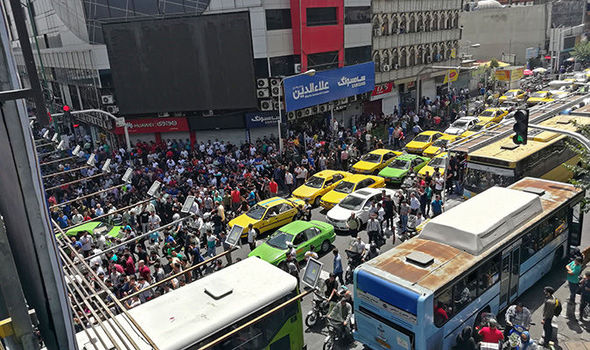 AN ongoing currency crisis and high levels of unemployment are pushing Iran to the brink of the civil war, with ordinary citizens speaking of their fury at the endemic corruption and financial mismanagement which is blighting their lives. With prices spiralling and President Hassan Rouhani at loggerheads with US opposite number Donald Trump, things got even worse this week with the reimposition of tough economic sanctions aimed at further undermining the Islamic fundamentalist republic.  Measures which target cars, gold and other metals trading, as well as the government’s ability to buy US dollars, came into force today.  The US has acted after Mr Trump pulled out of the JPCA nuclear agreement earlier this year, the deal which eased sanctions against Iran in exchange for no longer embarking on nuclear weapons development.  The Iranian rial has lost half of its value against the US dollar on the unofficial market this year, while the price of fruit and vegetables has increased by 50 percent since the start of the year Source