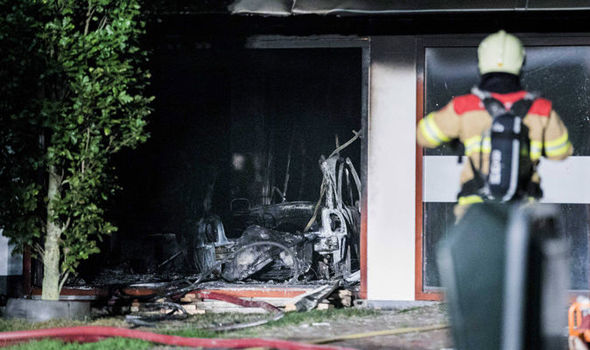 A CAR packed with gas canisters has ploughed into the town hall of Lingewaard in the Netherlands, with one exploding and killing the driver. A fire brigade spokesperson  told Dutch broadcaster Nederlandse Omroep Stichting (NOS) the killed motorist was found "in the vicinity" of the car.   The resulting fire caused major damage to the town hall, located in the Gelderland village of Bemmel.   The spokesperson told newspaper AD that police had received a threat that could be linked to the incident.   But Lingewaard Mayor Marianne Schuurmans told the newspaper said that news of the threat "surprised me".  She said: "I will have to wait for the police investigation. "What I find awful is that someone was killed. My thoughts go out to the family." The police would not confirm or deny that this was a targeted action. On Twitter, they said: "Let us not speculate on the cause of the fire in the Lingewaard town hall. The police have a firm suspicion about who was involved, which we are currently investigating." Source