Countdown 16 Days To HAJJ DOOM! Violence On Streets Of Iran As Police Use Tear Gas On Protesters; 'Death To Dictator!' 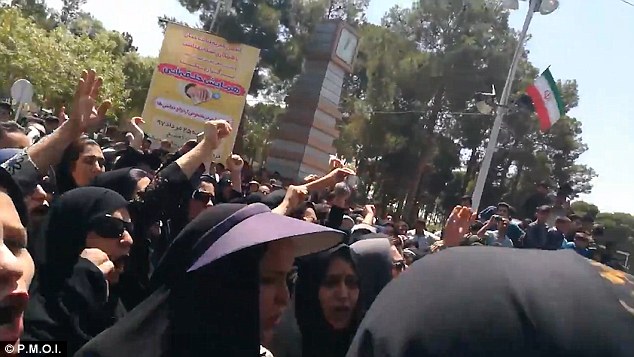 'Death to the dictator!' Violence on streets of Iran as police use tear gas on furious protesters, including chador-clad women, demonstrating against 'corrupt regime' ruining the country while waging ideological war abroad

Iran entered its third day of protests as furious citizens took to the streets to rail against the regime they blame for devastating the country's economy.  Protests have broken out in a number of cities this week over the dramatic drop of the country's currency and other economic problems ahead of the imposition of renewed US sanctions.   Videos shared online purportedly show some furious Iranians burning tyres and setting fire to police vehicles as demonstrations spun out of control.  Referring to Supreme Leader Ayatollah Ali Khamenei, many chanted 'death to the dictator' at protests. 'The nation is forced to beg while the leader lives like God,' was also among the furious chants against the Iranian regime at protests, according to the National Council of Resistance of Iran, a political organisation founded to oppose the fundamentalist regime ruling Iran.  Source