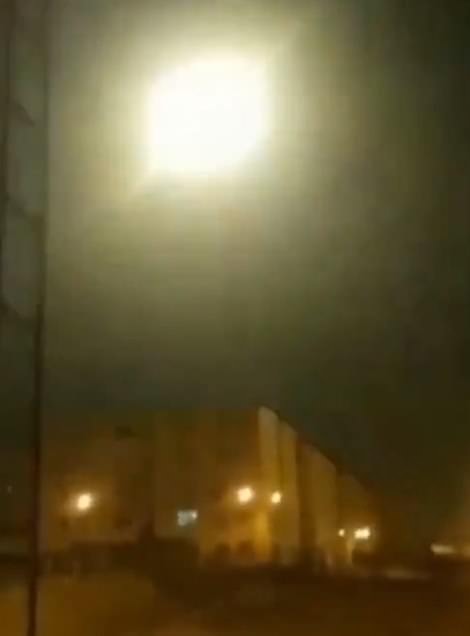 The moment Iran blew a jetliner out the sky after 'mistaking it for a US bomber': New video shows 'missile' hitting Ukrainian Airlines Boeing 737 before it crashed killing 176 - after Trump and Trudeau both said attack was a 'mistake'

New video appears to show a missile hitting the Ukrainian plane that crashed in Iran moments before it went down, killing all 176 people on board. The footage emerged Thursday afternoon, hours after President Donald Trump revealed he has serious doubts the crash was caused by mechanical failure, as Iranian officials have claimed. 'It was flying in a pretty rough neighborhood. Somebody could have made a mistake,' Trump told reporters at the White House on Thursday. 'I have a feeling that something very terrible happened, very devastating.' Canadian Prime Minister Justin Trudeau later echoed Trump's concerns, saying that evidence indicates an Iranian missile downed the and that the strike 'may have been unintentional'. Trudeau said Canadian and allied intelligence supports that conclusion. He declined to get into the specific intelligence, but said it appeared it was a surface-to-air missile that struck the plane. 'The intelligence evidence suggests very clearly a possible and probable cause for the crash,' Trudeau told a news conference. US intelligence officials are 'confident' that Iran shot down the Ukraine International Airlines Flight 752 after detecting a radar system being turned on before two missiles were launched, shortly before an explosion believed to have come from the jet, CBS reported. Two Pentagon officials added that the missiles were likely launched in error by Iranian anti-aircraft crews awaiting a US response to Iran's rocket strikes against American bases in Iraq hours earlier, according to Newsweek. The plane, a Boeing 737-800 en route from Tehran Imam Khomeini International Airport to Kyiv's Boryspil International Airport, encountered a problem moments after takeoff in the early hours of Wednesday. The latest video appears to show a missile hitting the plane as it flew over Parand, the area where it stopped transmitting its signal before the crash. A small explosion occurred when the missile struck but the plane did not explode. It continued flying for several minutes and turned back toward the airport while engulfed in flames before it exploded and crashed quickly. If Iran is responsible for the incident, it would be hugely embarrassing for the nation which had sought to avoid killing anybody in Wednesday's strikes. Eighty-two of the plane's passengers were Iranians. It could also spark fresh tensions in the Middle East just a day after Trump said Iran seemed to be 'standing down'., as the plane was also carrying 63 Canadians, three Britons, 11 Ukrainians, 10 Swedes, four Afghans and three Germans. Source

More than 50 mourners have been killed and more than 200 injured after a stampede broke out on the final day of Qassem Soleimani's funeral in Iran today. Iran's farewell to the general descended into chaos after thousands of people thronged to his home town of Kerman, where he is being buried on the third day of his funeral. With a sea of mourners clamouring to see Soleimani's coffin, state media said the overcrowding had caused a stampede which left 56 people dead and 213 injured. Footage which circulated online appeared to show emergency workers desperately trying to rescue mourners who had been thrown to the ground and badly hurt during the crush. Source