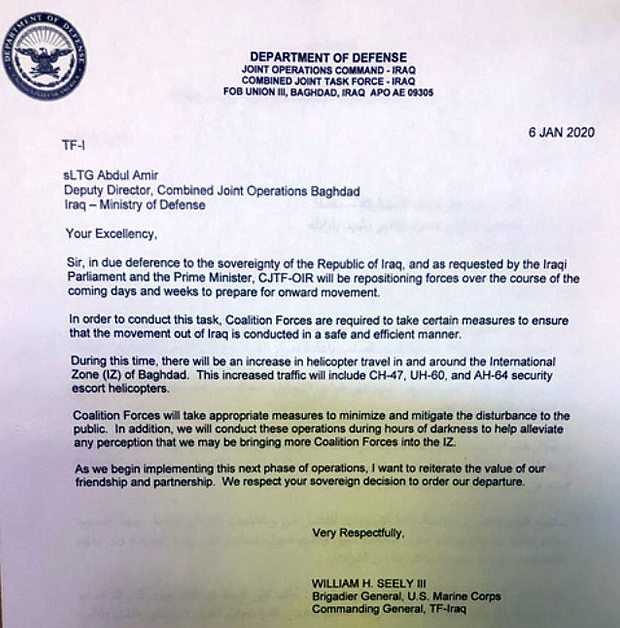 U.S.-led coalition says it will withdraw from Iraq -letter

BAGHDAD, Jan 6 (Reuters) - The United States-led military coalition against Islamic State said on Monday that it was pulling out of Iraq and would be repositioning forces over the next few days and weeks, a letter seen by Reuters showed. "Sir, in deference to the sovereignty of the Republic of Iraq, and as requested by the Iraqi Parliament and the Prime Minister, CJTF-OIR will be repositioning forces over the course of the coming days and weeks to prepare for onward movement," read a letter from United States Marine Corps Brigadier General William H. Seely III, the commanding general of Task Force Iraq. The authenticity of the letter, which was addressed to the Iraqi defence ministry's Combined Joint Operations Baghdad, was confirmed to Reuters independently by an Iraqi military source. "We respect your sovereign decision to order our departure," it said. Source

Chaos over U.S. troops in Iraq as Pentagon insists they WON'T withdraw despite general leading anti-ISIS coalition saying they'll move 'out of Iraq' in draft letter released by mistake amid anger over attack that killed Qassem Soleimani

Reports Monday that the U.S. would soon withdraw all its forces from Iraq were turned on their heads minutes later when U.S. Defense Secretary Mark Esper told reporters there were no plans to pull up stakes. 'There's been no decision whatsoever to leave Iraq, period,' Esper said, adding that he and his staff were 'trying to figure out' the meaning of a letter signed by a brigadier general that suggested the opposite. 'There are no plans to leave,' he emphasized, suggesting discussion of a massive troop movement could be merely a signal that forces are being repositioned inside Iraq's borders. Separately, Chairman of the Joint Chiefs of Staff Gen. Mark Milley told reporters that the letter was 'a draft. It was a mistake. It was unsigned. It should not have been released.' The draft was 'poorly worded' and 'implies withdrawal. That is not what’s happening,' Milley declared. The U.S. military had appeared to inform Baghdad that it was preparing for 'movement out of Iraq,' a day after the Iraqi parliament urged the government in a non-binding resolution to oust foreign troops. The head of the Pentagon task force in Iraq, Brigadier General William Seely, sent a draft letter to the head of Iraq's joint operations command. 'Sir, in deference to the sovereignty of the Republic of Iraq, and as requested by the Iraqi Parliament and the Prime Minister, [the coalition] will be repositioning forces over the course of the coming days and weeks to prepare for onward movement,' Seely wrote. He added: 'We respect your sovereign decision to order our departure.' Source