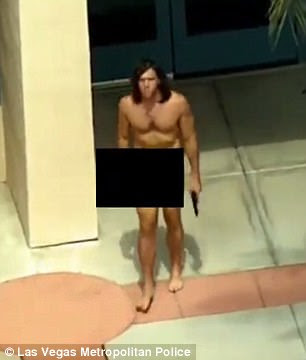 This is the terrifying moment that a Las Vegas cop is forced to shoot down a naked man before he can reach the loaded pistol he previously dropped. Police were called out to Life Springs Christian Church, in a busy area of Las Vegas, at 11am on Saturday after reports of that a naked, suicidal man was brandishing a gun. They arrived to find Jason David Funke, 25, sitting nude in an alcove by the church - starting a bizarre and frightening negotiation. According to Assistant Sheriff Todd Fasulo, several units - including K-9 officers and a helicopter - converged on the area when the call came through. The location was blocked to pedestrians and cars while police got into position - and then the negotiations began with the man, who had threatened to shoot himself. Footage from the helicopter shows Funke stand up, take his pistol and walk - apparently unsteadily - out to a wide open public area. Daily Mail >>>>>>>