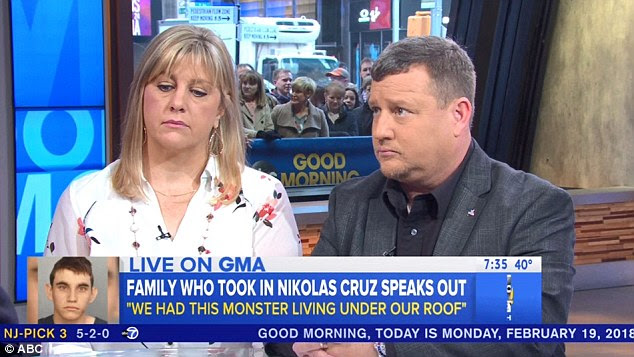 We thought we had the only key: Family who took Florida school shooter Nikolas Cruz in reveal they didn't know he could get into the gun safe where his AR-15 was stored - and claim the teen told them he was sorry after the massacre


The family who took Florida school shooter Nikolas Cruz into their home in November after his mother died said they thought they had the only key to the gun safe where his AR-15 rifle was stored. The 19-year-old used the assault rifle to kill 17 and injure more than a dozen more in a shooting last Wednesday at his old high school, Marjory Stoneman Douglas in Parkland. After their adoptive mother died on November 1 from pneumonia, Cruz and his brother moved in with a family friend. But the situation didn't work out for Cruz and he asked to move in with the Sneads, the family of a former classmate. James and Kimberly Snead appeared on Good Morning America Monday morning, and revealed that one of the stipulations of Cruz moving in was that he had to store his gun in a gun safe. 'I thought I had the only key to the gun safe,' James Snead said. Source