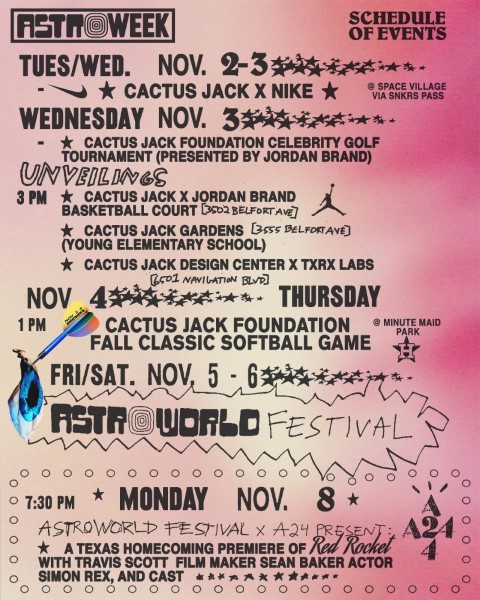 STAMPEDE Started At 9:38 PM
8 dead in stampede at Astroworld Music Festival in Houston
Eight people were killed and several more injured in a stampede during a sold-out hip-hop music festival in Houston, Texas, the fire department said. Ambulances and firefighters were called in after multiple injuries were reported on the opening night of the Astroworld Music Festival. “We have eight confirmed fatalities at this point,” Houston Fire Chief Samuel Pena told reporters, adding that overall, 23 people were transported from the scene. “The crowd began to compress toward the front of the stage, and people began to panic,” Pena said. A video on social media shows paramedics performing CPR on several people who are lying on the ground outside the stage, as loud music continues to play in the background. Source

As we were arriving to the Astroworld Festival at NRG Park right at 2:00, a stampede burst through the gates. Hundreds of people destroyed the VIP security entrance, bypassing the checkpoint. People were trampled. Some were detained.

(Excuse any language you may hear) pic.twitter.com/d0m2rjqAAk

HOUSTON (AP) — At least eight people died and numerous others were injured in what officials described as a surge of the crowd at the Astroworld music festival in Houston while rapper Travis Scott was performing. Officials declared a “mass casualty incident” just after 9 p.m. Friday during the festival where an estimated 50,000 people were in attendance, Houston Fire Chief Samuel Peña told reporters at a news conference. “The crowd began to compress towards the front of the stage, and that caused some panic, and it started causing some injuries,” the fire chief said. “People began to fall out, become unconscious, and it created additional panic.” The show was called off shortly thereafter. The fire chief said “scores of individuals” were injured. Officials transported 17 people to hospitals, including 11 who were in cardiac arrest, Peña said. Many people were also treated at the scene at NRG Park, where a field hospital had been set up. About 300 people were examined at that site throughout the day, he said. Astroworld is a two-day music festival that was scheduled to take place Friday and Saturday in Houston. The event was sold out, according to the Astroworld website. Saturday’s performances have been canceled. Source
at November 06, 2021