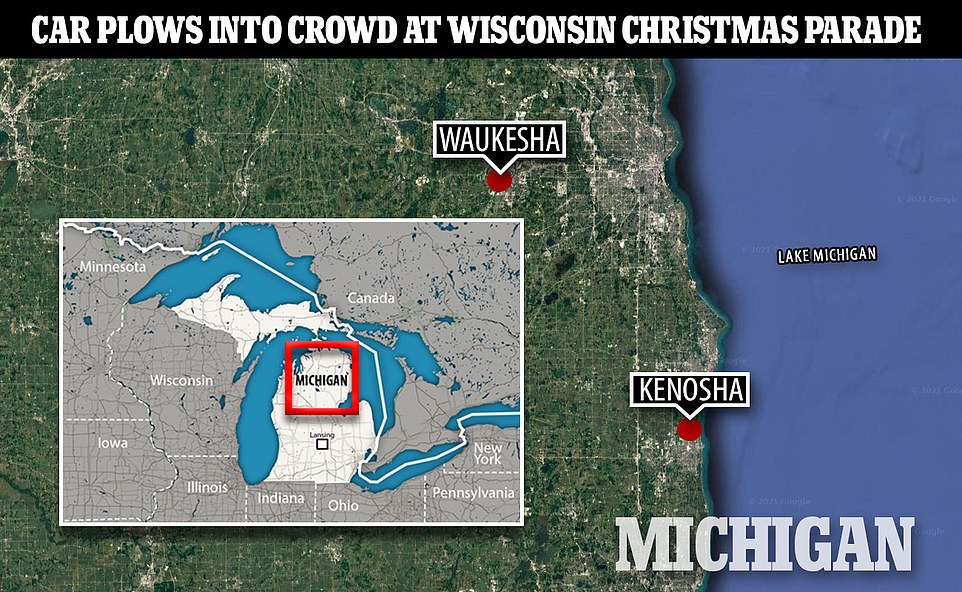 Moment Ford SUV plowed into Wisconsin Holiday parade sending 'bodies flying everywhere' and leaving at least 20 people severely injured: Police recover vehicle and 'are aware of a person of interest'
A car traveling at high speed plowed into a holiday parade in suburban Milwaukee, Wisconsin, killing one person and leaving at least 30 people injured, among them several elderly women who were part of a 'Dancing Grannies' float and members of a schoolgirls' dance team, according to reports. Terrifying video posted to social media shows a speeding red SUV collide into a group of people marching in the middle of the street during the annual holiday parade in Waukesha, some 20 miles west of downtown Milwaukee. Another video shows the speeding SUV narrowly miss a young girl who was dancing in the street as the out-of-control vehicle drove by just feet away. There were also unconfirmed reports of shots fired. The chief of police said that the red SUV has been recovered, though there was no word as to whether a suspect was in custody as of 7pm Eastern time on Sunday. At around 7:15pm local time, the Waukesha Police Department sent a push alert to cell phones of residents in the area asking them to shelter in place 'within a half-mile radius of the 5 points downtown.' 'We have a person of interest that we are looking into at this time,' Waukesha Police Chief Dan Thompson told reporters. Thompson said that the SUV rammed into the crowd at 4:39pm local time - 39 minutes after the parade started. The incident comes just two days after Kyle Rittenhouse, the accused Kenosha shooter, was acquitted of murder charges in the deaths of two men during the unrest that erupted last year in the wake of a police shooting of a black man. The Rittenhouse acquittal, which stoked division along political and racial lines, prompted local and national authorities to place security forces on high alert. Source

TRIGGER WARNING: 🚨DISTURBING VIDEO🚨A viewer sent in horrifying video the moment a red SUV plowed through a crowd during the #Waukesha Holiday Parade. Its currently unclear how many people have been injured. Updates to come on @tmj4 pic.twitter.com/u6q10VgTJ1