Shooter on store roof kills five and injures 16 at July 4th parade in affluent Chicago suburb Highland Park: Bodies lie in street as gunman remains at large Five people are dead and at least 16 are injured after a shooting at a July 4th parade in the affluent Chicago suburb of Highland Park.
The shooter - who remains at large - is said to have opened fire from the roof of what was an Uncle Dan's outdoor outfitting store, picking off people in the crowd who at first confused the sound of gunshots to with firecrackers and fireworks. Chicago Sun Times reporter Lynn Sweet was at the parade when gunfire rang out. She has since shared photos and videos from the event which show people lying on the ground, and has described it as a 'bloodbath'. Illinois Governor JB Pritzker says he is aware of the shooting and is monitoring the 'situation'. Witnesses described a 'sickening' scene and is it feared that children are among the dead. 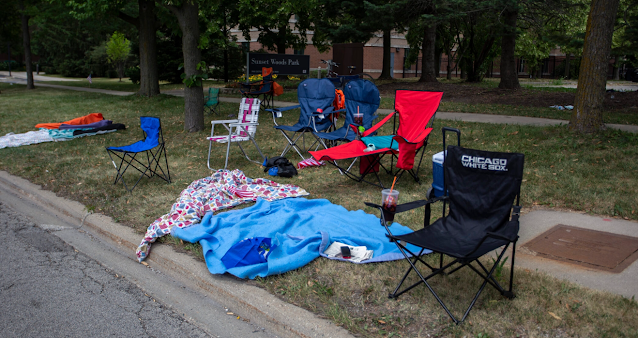 'I saw multiple lifeless bodies, people in a pool of blood. It is sickening,' witness Miles Zaremski told CNN. 'If this can happen here in our suburb it can happen anywhere,' he added, a reference to the quiet suburb's low-crime. Highland Park Police has not yet commented on the incident but Lake County Sheriff's Office is responding to the incident. Miles Zaremski, who was at the parade, told CNN: 'It was sickening. If this can happen here it can happen anywhere. 'To see these people in blood on the ground... how many are dead. I don't know. 'Not only were police vehicles there that lead off the parade, after it occurred, there were police there. 'Paramedic vehicles were also part of the parade.... just to hear the pop, pop, pop. 'I have never seen this and I'd hope no American would ever see this.' 'I saw 12 to 24 injuries... I saw a couple of lifeless bodies on the ground.' Source