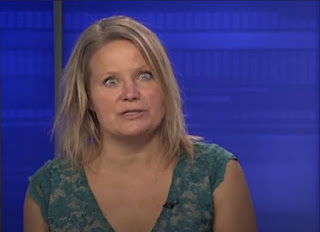 Local New York CBS anchor suspended after appearing in disarray, slurring words on air
CBS6 Albany anchor Heather Kovar was suspended on Sunday after appearing on air in disarray and slurring words during her broadcast, according to the Times Union, in a media story that went viral. Kovar began her broadcast by noting a gas explosion at a plant in Medford, Oklahoma. She slurred as she said evacuations were ordered and that the investigation of the explosion was going. "Evacuations have been ordered for the town of Medford, Oklahoma, with unknown fatalities and injuries…injuries are unknown in this situation. All right, so, well, hello! Good afternoon! Like, I was telling you this morning, if you watched us this morning…I told you, you know what? What a beautiful day outside! It is just amazing," Kovar said. Source

Viewers expressing concern over train wreck of local evening newscast out of Albany. Anchor Heather Kovar appeared disheveled, misspoke, and slurred her words for the entire newscast. Here, she tries to set up the weather and toss to the meteorologist, who’s name she gets wrong. pic.twitter.com/70jwwvykKt