I wonder how many of these UK house 'gas' explosions will we have this summer?
10?
150?
1000?
And I do wonder if Daily Mail will publish a map of ALL the Gas explosion for this summer?
Gas explosion destroys block of 20 flats as huge 'inferno' rips through building: Witnesses say victim 'jumped out of a window' as two people are taken to hospital after roof collapsed in blaze
Two people were rushed to hospital with injuries after a huge fire broke out at a block of flats this morning - caused by a major gas explosion. Emergency services rushed to the scene on Redwood Grove, Bedford, after the three-storey residential building went up in flames, forcing residents to jump from windows to escape the roaring inferno, witnesses said. Footage shared on social media shows plumes of flames erupting through the block of 20 flats while fire engines showered the blaze with water. The horror blaze was seen ripping through the roof of the building - which partially collapsed - as terrified onlookers heard screams from the scene. Currently, two people have been taken to hospital - one with serious injuries who has gone to Addenbrooke's Hospital, in Cambridge. One local resident in Bedford said they saw a person jumping from a second-floor window to escape the burning building. They said: 'I heard the explosion from my house round the corner. 'I walked to town and saw the flames and also witnessed someone jump from the second-floor window whilst flames were blaring out.' Locals have been warned to keep windows closed and avoid the area as thick black smoke was seen billowing through the air. Source 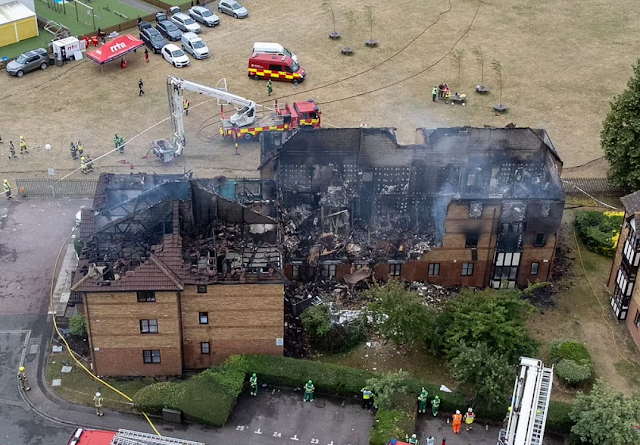